Home » Quran » How to Read the Quran 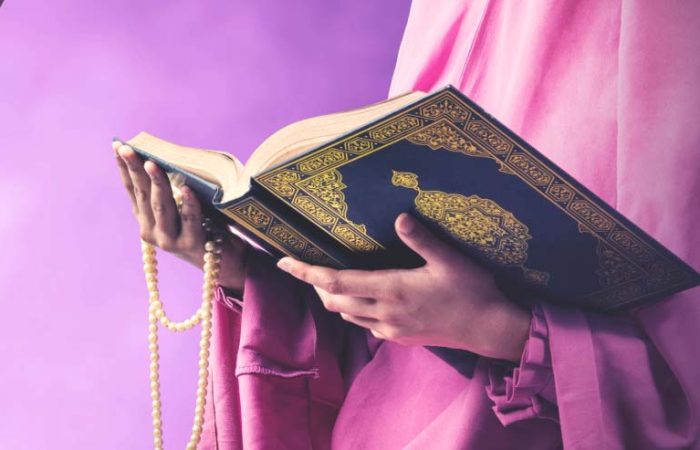 How to Read the Quran

The Quran is the final holy scripture of God, according to Muslims, that was revealed about 1400 years ago to God’s final prophet, Prophet Muhammad [peace be upon him and his progeny]. The Quran is the everlasting miracle of this great prophet that has not been altered or distorted to this day. The Quran itself states that God has protected it from any alteration or distortion. 1 It is the word of God to the letter and a miracle in terms of eloquence and style.

It is very important for Muslims to learn to read and recite the Quran as it is a book that not only explains certain laws and rulings of Islam, but also contains many instructive lessons, stories, parables, words of advice, glad tidings for believers, and warnings to disbelievers.

Reading the Quran in its original language (Arabic) has many benefits and reward as stated in narrations by Prophet Muhammad and his household. 2 This is because it is the language that it was originally revealed in. It is also recommended to read the Quran by looking at its text. 3 Yet another reason it is important to read the Quran is because every Muslim must read a number of surahs of the Quran in his/her daily prayers.

How to Read the Quran

Learning how to read the Quran is very difficult nowadays if one does not have a skilled and competent teacher. For this reason, another effective and efficient way of learning the reading of the Quran is through online video lessons. The very first step that a learner of the Quran should take is learning the Arabic alphabet.

Learn the Arabic Alphabet for Free

Text of the Quran for Free

As a bonus, you can read or download the complete text of the Quran along with its translation on our website by visiting our course page.

Subscribe to Our Video Lessons on How to Read the Quran

If you want to learn the other rules of reading the Quran so that you can master the reading of the Quran, you can subscribe to all of our lessons by enrolling in Islam4u’s “How to Read the Quran” course. The rules other than the alphabet that you will learn are as follows:

How to Read the Quran Fast and Fluently

Our online courses offer the latest and most practical methods of learning to read the Quran easily, fast, and fluently.

These video lessons are presented by a competent and qualified teacher. Learning to read the Quran requires you to listen to the recitation of the Quran by a good teacher and reciter word by word and verse by verse. You should try to repeat after him and also recite along with him. For this reason, we also offer supplementary lessons that serve this purpose. Therefore, you can implement the rules of the reading of the Quran and hopefully become a fluent reciter of the Quran.

Once the basic rules of reading the Quran are learned, it is time to implement them in an even more fluent manner. That is, to read the Quran without making too many pauses, repetitions, and mistakes. This is done by observing the rules of tajweed (تَجويد).

Learning tajweed of the Quran is essentially a more advanced set of phonetic rules and one of the final steps that needs to be taken in order to read the Quran fluently. Listening to and repeating after authentic and qualified reciters is the gold standard of learning tajweed and achieving greater fluency in reading the Quran. Nevertheless, knowing the theoretical rules of tajweed is also very important.

Tajweed literally means making better, beautifying, and perfecting something. 4 Practically it means to articulate the letters from their places of articulation and to observe their manners of articulation. It is through tajweed that one’s recitation can be beautified and perfected.

The Prophet of Islam, Muhammad [peace be upon him and his progeny], has recommended Muslims to read and recite the Quran with Arabic melodies and sounds, and not with the melodies of sinners. 5 He has also said, “Adorn the Quran with your [good] voice.” 6 In other words, he has advised us to read the Quran beautifully by observing the rules of tajweed and also in a melodious manner.

Islam4u has put together complete course on learning tajweed of the Quran. The course is titled, “Learn Tajweed.” Click here to enroll now.

Some Rules of Tajweed

Other than learning these theoretical rules, just like learning to read the Quran, it is very important that one also practices implementing these rules by listening to the recitation of qualified Quran reciters and repeating after them.

How to Read the Quran Beautifully and Melodiously

Tajweed, as the aforementioned narration from Prophet Muhammad indicates, also includes reading the Quran melodiously and with a good voice. This can be done in one’s recitation by using the Arabic musical modes known as the maqāmat (مَقامات). Think of these modes as the musical scales in Western music, albeit with different melodic patterns, intervals, and tonality that is suitable to the sanctity of the Noble Quran.

There are eight maqams that are used in the recitation of the Quran, namely:

To memorize them, one can learn the sentence ṣu-ni-‘a-bi-sa-ḥa-ri-k
(صُنِعَ بِسَحَرِك) where each letter stands for the name of the maqams.
The maqamat can be used in the two styles of Quran recitation:

One can perhaps learn the maqamat from a teacher who is knowledgeable in this science. He/she must tell the learner how each maqam sounds like by giving examples from the Quran. Moreover, the learner must try to learn each maqam by ear as well, meaning he/she must listen to melodious recitations of the Quran by his/her teacher and qualified reciters.

There are different ways of reciting the Quran melodiously. The Quran itself recommends reciting the Quran with tartil or in the murattal style. This has been mentioned in surah al-Muzzammil (المُزَّمِّل) 73:4 which reads, “Recite the Quran in measured rhythmic tones.”

The mujawwad (derived from tajweed) style, also known as the tahqiq style, is much slower in pace than the murattal style. This method of recitation is more often used in live gatherings, usually in funerals as well as for other religious ceremonies and occasions.

In the mujawwad style, a greater variety of melodies, maqamat, tones, and vocal techniques are used compared to the murattal style. For this reason, this style of recitation is much more embellished and beautified than the murattal style. Of course, the rules of tajweed must also be observed while using this method. Due to tahqiq’s slower pace, the listener has a better chance of reflecting on the verses of the Quran. Listen to a sample of the Quran read by Sheikh Muhammad al-Laythi in the mujawwad style.

Only a few reciters have recited the whole Quran in this style. Two of them include:

Science of Stopping and Continuing

Another very important matter that must be taken into consideration while reading the Quran is knowing on what words one must stop, and from what words one must continue reading. This is called the science of stopping and continuing (Arabic: وَقفِ وَالإبتِداء Waqf wa al-Ibtidā’). The reason this is so important is that the meaning of the Quran will be conveyed correctly only if the rules of this science are observed. In other words, if they are not observed, the meaning of the verses may become corrupted or incomplete.

Learning the meaning of the verses of the Quran and the Arabic language, in general, will help a great deal in this regard. But as a general rule, it is the Sunnah (سنّة) and recommendation of the Noble Prophet [peace be upon him and his progeny] to stop on the last word that comes at the end of every verse. You can also learn some of the rules of waqf by subscribing to your online video lessons.