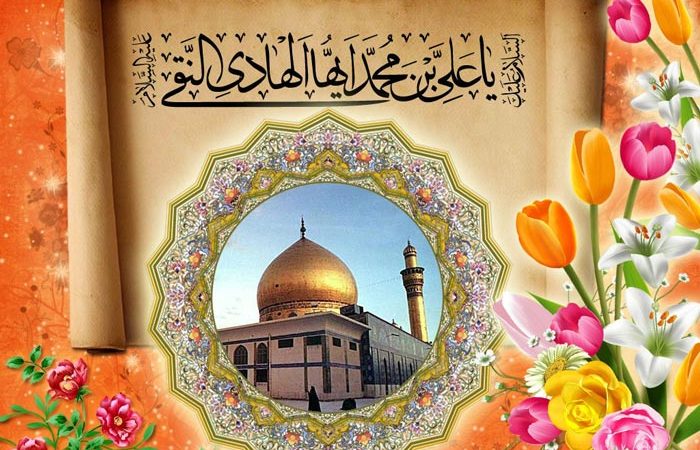 Imam Ali ibn Muhammad al-Hadi al-Naqi (a) is the tenth Twelver Shiite Imam. Imams are the spiritual and political successors of Prophet Muhammad (s). Imam al-Hadi (a) was the chosen leader and guide of the Muslim community after the death of the ninth Imam, Imam al-Jawad (a). This article on Islam4u will delve into the details of the life and character of Imam al-Hadi (a), as well as his virtues and teachings.

The Birth of Imam al-Hadi (a)

The Parents of Imam al-Hadi (a)

Imam al-Hadi was blessed with a virtuous and modest spouse, Hudayth. Together, they were blessed with four sons, al-Hassan (the eleventh Imam), Muhammad, al-Hussain, and Ja‘far. Furthermore, some reports state that the couple was also blessed with a daughter named ‘Iliyyah or ‘Aliyyah, adding to the warmth and love that surrounded their household.

Imam al-Hadi’s teknonym was Abul Hassan. Two of his most famous titles are al-Naqi, the pure one, and al-Hadi, the guide, due to his unwavering commitment to truth and righteousness. He was also recognized by other prestigious titles such as al-Murtada, the chosen one, al-‘Alim, the knowledgeable one, al-Faqih, the jurist, al-Amin, the trustworthy one, and Nasih, the advisor.

Imam al-Hadi (a) became the Imam in 220 AH at the age of eight, a young age that some might consider unusual for an Imam. However, this was not a cause for concern among the Shia, as they had previously accepted the young age of Imam al-Jawad (a). According to Sheikh Mufid, the majority of the Shiites accepted Imam al-Hadi’s imamate without hesitation, with only a small minority recognizing Musa al-Mubarqa‘, the Imam’s brother, as their Imam.

However, it was not long before even these few individuals came to acknowledge Imam al-Hadi (a) as the rightful Imam. It is said that it was because Musa Mubarqa‘ shunned them. This consensus among the Shiites, along with the fact that no one else claimed to be the Imam, serves as solid evidence of Imam al-Hadi’s imamate. Additionally, the texts dictated by the previous Imams also lend support to the fact that Imam al-Hadi (a) was the rightful Imam, further solidifying his position as the leader of the Shia community. Given his father’s martyrdom in 220 AH and his martyrdom in 254 AH, Imam al-Hadi’s imamate lasted 34 years.

Imam al-Hadi (a) Is Summoned to Samarra

In the year 233 or 244 AH, the Abassid caliph, Mutawakkil, made a fateful decision to forcibly relocate the beloved Imam al-Hadi (a) to the distant city of Samarra. Reports suggest that this decision was driven by jealousy and fear, as the Imam’s popularity among the people had begun to soar. The caliph was reportedly convinced to take this drastic action by a man named Abdullah ibn Muhammad, as well as others such as Bariha ‘Abbasi, the leader of the congregational prayer in the two holy mosques of Mecca and Medina. To carry out this plan, Mutawakkil appointed Yahya ibn Harthama as the chief of the Imam’s transfer from Medina to Samarra.

Despite Mutawakkil’s attempts to justify the relocation, the Imam’s followers in Medina were incensed and fiercely protested against the ruling Abbasid regime. When the Imam arrived in the city of Kazimiyya, he was warmly received and welcomed by the people. He ultimately settled in a district in Samarra known as Askar, where he resided until his tragic martyrdom.

Preparing the Ground for the Occultation

One of the greatest treasures left behind by Imam al-Hadi (a) is the well-known Ziyara of Jami‘a al-Kabira (الزِيارة الجامعة الکبيرة), meaning the great comprehensive ziyara. This ziyara was dictated by his holiness after one of his followers asked him to teach him a comprehensive and eloquent ziyara. This ziyara can be recited for every Imam and in wherever one is located. For example, it may be recited in the shrines of Imam Ali (a), Imam al-Hussain (a), or Imam al-Rida (a). The ziyara is mostly about the high and exalted position of the Imams and the duties their followers have toward them. Many commentaries have been written about this ziyara. For a text of this ziyara along with its translation, click here.

Imam al-Hadi (a) was martyred by the Abbasid Caliph of his time by way of poison on Rajab 3, 254 AH, in Samarra. Some have said that he was martyred on Jumada al-Thani 25 or 26 of the same year. Imam al-Hassan al-Askari (a) succeeded him and was the one who prayed behind Imam al-Hadi’s body and buried him in his house. Imam al-Hadi (a) and Imam al-Askari (a)are known as Askariyayn, meaning the two Imams of the Askari district of Samarra. Their shrine is in Samarra, and numerous pilgrims visit the shrine yearly.

A Few Hadiths by Imam al-Hadi (a)

1. Allah was alone primordially, and no one was with Him. Then, He created new things and chose the best names for Himself. (Bihar al-Anwar, vol. 54, p. 83)

3. If you want Allah’s favor, accept the criticisms that are leveled against you and seek to reform yourself. (Wasa’il al-Shi‘a, vol. 2, p. 18)

4. Indeed, there are certain unique places that Allah loves people to pray in them and answers their prayers in those places. One of those places is the ha’ir (a place close to the grave) of Imam al-Hussain (a).

Imam al-Hadi (a) was a prominent figure in Shia Islam and the tenth Imam in the line of succession from Prophet Muhammad (s). He was known for his knowledge and piety and was highly respected by his followers for his spiritual guidance and leadership. He played a significant role in spreading the teachings of Shia Islam, and his legacy continues to be honored and revered by Shia Muslims to this day. He was martyred by the Abbasid Caliph of the time in 254 AH in the city of Samarra.