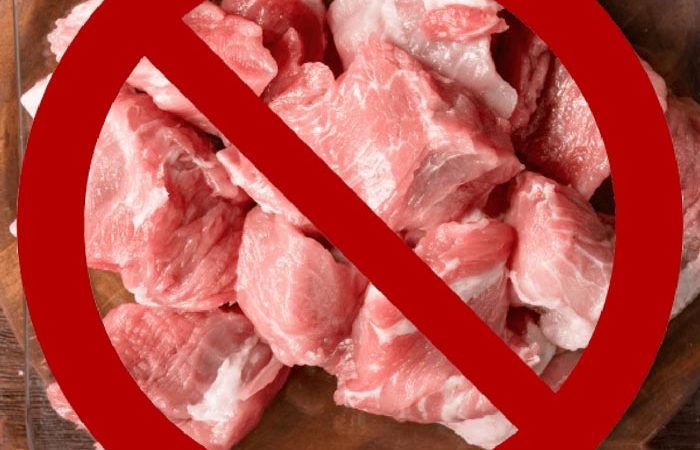 Verses of the Quran That Prohibit Pork Consumption

The Quran has clearly stated in numerous verses that eating the flesh of swine, including domestic and wild forms, such as boars and warthogs, is haram (religiously unlawful). A verse reads:

He has forbidden you only carrion, blood, the flesh of the swine, and that which has been offered to other than Allah. But should someone be compelled, without being rebellious or transgressive, there shall be no sin upon him. Indeed Allah is all-forgiving, all-merciful. (Quran 2:173 Translation by Qarai)

In another verse, Allah states:

Say, ‘I do not find in what has been revealed to me that anyone be forbidden to eat anything except carrion or spilt blood, or the flesh of swine—for that is indeed unclean.

So not only is eating pork haram, but it is also unclean and ritually impure or najis. Pigs are impure whether they are dead or alive. If someone touches them with a wet hand, their hand becomes najis. Eating anything intrinsically najis, such as pigs and dogs, is forbidden in Islam, whether or not they are slaughtered in the Islamic way.

The Bible and the Torah Also Prohibit Pork Consumption

7 And the swine, though he divide the hoof, and be cloven-footed, yet he cheweth not the cud; he is unclean to you.

Likewise, the Book of Deuteronomy 14:8 reads:

And the pig, which indeed has divided hooves, with cloven foot, but does not chew the cud, is unclean for you. Their flesh you shall not eat, and their dead bodies you shall not touch.

Therefore, we see that eating pork is forbidden as stated in the Bible for both Christians and Jews. Jesus never made eating pork permissible. He said in the Gospel of Matthew 5:17:

So Jesus did not change the laws of the prophets before him such as Moses. Eating pork is forbidden for both Christians and Jews. However, Christians still eat pork even though their religion has forbidden it.

2. Drinking its milk is also haram.

3. Pigs are impure animals that do not become pure even if they are washed.

4. If a pig drinks from a container or licks it, that container must be washed seven times to become pure again.

5. Buying or selling pigs is not permissible.

Why Is Pork Consumption Haram?

There are many reasons one could state why eating pork is haram. Not only does eating pork do physical harm to the body, but also negatively affects one’s soul. Pigs are very immoral and promiscuous animals when it comes to sexual behavior. It is said that they are the most shameless animal. They do not care if their mate mates with other male pigs and even enjoy it. Therefore, pigs are not protective of their mates and readily expose them to be used sexually by other pigs. When a person eats their meat, it causes them to acquire those characteristics, too. This is not something that Muslims say. Europeans have also said that pigs symbolize “indifference and not being protective of one’s spouse.” However, Islam considers “ghayra” (being protective of one’s spouse) as one of the praised qualities that everyone should have.

In today’s world, we are witnessing that men are becoming less protective of their wives. “Cuckoldry” is becoming increasingly common, where men allow other men to have intercourse with their wives in exchange for money, for the joy of it, or otherwise. This is mostly seen among communities that eat pork, such as the US, Canada, and European countries. Such sexual behavior is less seen in countries that do not eat pork, such as Muslim countries.

The Harmful Effects of Pork on One’s Health

It has been scientifically proven that there are many microbes and bacteria in pigs that can lead to many diseases. Here is a list of those diseases:

1. Bloody diarrhea: There are certain parasites in the intestines of pigs called balantidium coli that are one of the most important sources of the contraction of this disease across the globe.

2. Infectious jaundice: This disease can be spread through water that the urine of pigs, dogs, or mice has contaminated.

3. Entamoeba histolytica: This is another form of diarrhea that pigs can transfer to humans.

4. Erysipeloid: Many animals, including pigs, contract this disease and can transfer it to other humans. It is manifested as red and painful spots accompanied by a burning sensation on the back of one’s hands.

The amount of fat and uric acid in pork is very high. For this reason, it plays a role in the contraction of many diseases, including arteriosclerosis, joint pain, and poisoning. Pigs do not care about what they eat, even if it is dirty and unclean things such as their own excrement. As a result, the stomachs of pigs are home to all kinds of bacteria and diseases, which transfer to their meat, blood, and milk. This is probably why Islam has instructed us to wash a container from which a pig has eaten or drunk seven times.

A Few Other Diseases From Pork Consumption

These were only a few diseases that could be contracted through exposure to pigs and pork. At least three other illnesses can only be contracted by consuming pork. We will briefly mention them:

1. Taenia solium, a kind of tapeworm

2. Ladrerie, which is mostly found in countries that consume pork

3. Trichinella spiralis, another kind of tapeworm (aka “pork worm”)

The tapeworms in pork cannot be killed even if the meat is thoroughly cooked. Besides the diseases that can be contracted through pork consumption, the meat itself is very hard to digest and causes much trouble for the body.

The Miracle of Islam and the Quran

A long time before the harmful effects of eating pork were even discovered, Islam had prohibited the consumption of pork and considered it filthy and impure. This is a miracle of the Quran and Islam. All the laws of Islam are based on logic and reason, even if we have not yet discovered all of them.

Islam forbids the consumption of pork. It deems it unclean and impure. Many reasons have been stated for its prohibition besides being unclean and impure. The qualities of pigs, especially their sexual promiscuity, can also affect human beings and cause them to acquire those qualities if they consume their meat. Besides that, there are many diseases that one can contract by eating pork, such as tapeworms. Therefore, Islam has prohibited the consumption of pork. If you want to learn more about halal and haram food, enroll in our free Halal Foods course.