Home » Quran » Ramadan in the Quran 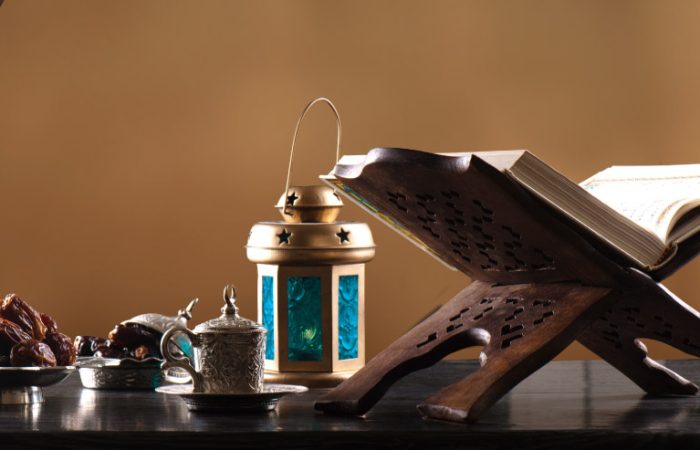 Ramadan in the Quran

Ramadan in the Quran is a fascinating subject indeed. The holy month of Ramadan is when God Almighty revealed the Noble Quran to His final Prophet, Muhammad, peace be upon him and his progeny. God mentions the name and characteristics of this month in the Noble Quran. God says in the Quran that Ramadan is the month in which He revealed the Quran to the Prophet and also a blessed month in which He has prescribed fasting for His servants. The name of this holy month has been mentioned once in the Quran in a group of verses that are known as “the verses of fasting” or Āyāt al-ṣiyām (آیات الصِّيام).

In this article, you are going to read:

Ramadan comes from the root word /rmḍ/, that means intense heat, and Ramadan means the intense heat of the sun. Ramadan is named so because the first month of Ramadan in history was during the summer season when the weather was the hottest. Ramadan is also one of the names of Allah.

Verses 183-187 of surah Baqarah (سورَةُ البَقَرَة) are all about fasting in the month of Ramadan. Verse 183 states how fasting is not something that is confined to Muslims, but rather even people of other religions before Islam were also obligated to fast during certain days in the year. The verse also states that the goal of fasting is to be Godwary and pious. In reality, when one fasts, they are not only refraining from eating, drinking, and intercourse but also guarding themselves against sins, immorality, misbehavior, and crimes. The verse states:

O you who have faith! Prescribed for you is fasting as it was prescribed for those who were before you, so that you may be Godwary.

The Quran: Fasting in the Month of Ramadan is Not Obligatory for Some People

Ramadan: The Month of the Revelation of the Quran

Verse 184 of surah Baqarah is a very well-known verse of the Quran that states that God Almighty revealed the Noble Quran to His prophet in the holy month of Ramadan. This is the only place and only verse in the Quran in which God mentions the name, Ramadan. Our narrations state that Ramadan is one of the names of God and that it is best if we do not say it by itself when referring to the month of fasting. In other words, instead of saying, “Ramadan has arrived,” we should say, “The month of Ramadan has arrived.” This is precisely what the Quran has done, where it says, شَهْرُ رَمَضَانَ. Shahr (شَهر) means month, and Ramadan is the name of the month.

On What Day of the Month of Ramadan was the Quran Revealed?

The Noble Quran was revealed in the month of Ramadan on the night of Laylat al-Qadr, or the Night of Ordainment. The Quran expressly states this fact in surah Qadr :

In the Name of Allah, the All-beneficent, the All-merciful

Indeed We sent it down on the Night of Ordainment.

In the Name of Allah, the All-beneficent, the All-merciful

By the Manifest Book!

We sent it down on a blessed night, and We have been warning [mankind].

Every definitive matter is resolved on it,

as an ordinance from Us. We have been sending [apostles] (5) [Translation by Qara’i]

God Says in the Quran: He is Very Close to Us in the Month of Ramadan

Verse 186, as the fourth verse among the verses of fasting in the Quran reminds of us a very important matter. God says that if My servant calls me in this month, he should know that I am very close to him; that I will answer the prayer of the one who prays. “So let them respond to Me, and let them have faith in Me, so that they may fare rightly.” 1 God Almighty is very close to us, especially in the month of Ramadan. In surah Qāf (سورَةُ ق), God says that He is closer to us than our jugular vein. 2 If we sincerely pray to God and be good and perform our religious duties, God will answer our prayer. However, if our prayer is not in our interest, it would be answered in another way. For example, God would:

Verse 187 of surah Baqarah talks about specific laws of fasting that those who fast must observe during Ramadan. Firstly, God says that having intercourse is only allowed during the night of the month of Ramadan when eating and drinking are also allowed. God says He knew that if He made it forbidden, we would surely betray ourselves and engage in it. Therefore, he allowed it during the nights of the month of Ramadan. God says in this verse:

You are permitted on the night of the fast to go into your wives: they are a garment for you, and you are a garment for them. Allah knew that you would betray yourselves, so He pardoned you and excused you. So now consort with them and seek what Allah has ordained for you, and eat and drink until the white streak becomes manifest to you from the dark streak at the crack of dawn. Then complete the fast until nightfall, and do not consort with them while you dwell in confinement in the mosques. These are Allah’s bounds, so do not approach them. Thus does Allah clarify His signs for mankind so that they may be Godwary. 3

When Can We Eat and Drink?

As verse 187 clearly stated, one should refrain from eating once dawn arrives and the fajr or dawn adhan is chanted. The time one can once again eat is when the maghrib adhan is chanted. It is very important to know that not eating and drinking is also good for our body. Nowadays, many athletes and non-athletes fast due to the health benefits that it has. When one fasts, the body is detoxified meaning all the toxins that have been accumulated in the body are excreted. However, it is also important to note that fasting also has benefits for the soul. When one fasts, one can easily engage in acts of worship without being preoccupied by things he can eat during the day. Above all, fasting is for self-building and becoming a true Muslim who is obedient to God and submits fully to Him.

That is why the month of Ramadan is also known as the spring of the Quran. In fact, the number one thing that is relevant to this month is undoubtedly the Quran. As a result, one should try to recite the Quran as much as one can in this month. Our Prophet and Imams have recommended that one recites at least one juz each day in this month so that by the end of the month, one has recited the entire Quran.