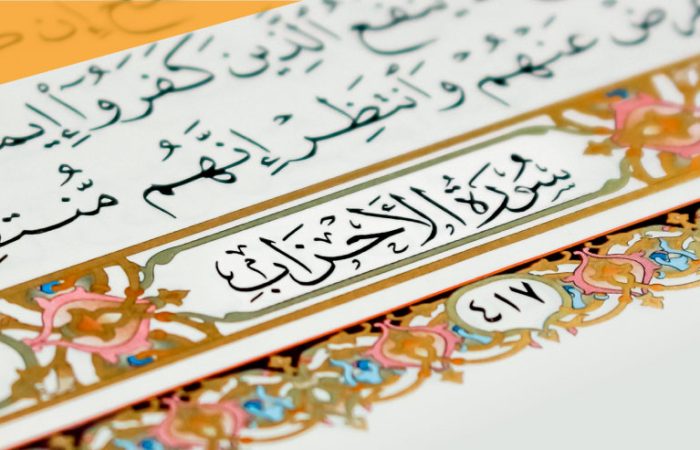 Surah Ahzab is the 33rd surah of the Quran that Allah revealed to Prophet Muhammad in the city of Medina. It is named Ahzab because two of its verses refer to the Battle of Ahzab, aka the Battle of Trench. In this article on Islam4u, the following topics will be discussed:

Surah Ahzab is the 33rd surah that Allah revealed to the Prophet in the city of Medina. The surah is called Ahzab as it refers to the Battle of Ahzab or Trench that took place in the year 5 AH. Verse 21 of surah Ahzab says that there is a good example in the Noble Prophet, and therefore Muslims must follow his example. Surah Ahzab also contains the Verse of Purification, by which Allah purifies the Ahlul Bayt, that is, the household of the Prophet.

The Gist of Surah Ahzab

Surah Ahzab covers a variety of topics such as not obeying the disbelievers and instead obeying Allah, certain laws of the age of ignorance (jahiliyyah), the story of the Prophet’s marriage with Zaynab bint Jaḥsh, and the issue of hijab. Moreover, surah Ahzab has many famous verses such as the verses of Ul al-Arḥām (اولوالارحام), Ta’assī (تأَسّي), Taṭhīr (تَطهير), Khātimiyyah (خاتمية), Ṣalawāt (صَلَوات), Amānah (اَمانَة), and a verse that names the wives of the prophet as the Mother of Believers (امّهات المؤمنين).

There are at least six famous verses in surah Ahzab. They are verses of:

1. Those of [blood] relationship (اولوالارحام) (6)

The Verse of Relationship

The Prophet has a greater authority over the believers than they have over themselves, and his wives are their mothers, and some of the relatives are preferred over other believers and the migrants according to the Book of God [concerning the matter of the inheritance], nonetheless you grant favor on your friends [and give something out of your wealth to them as a gift, even though they will not inherit from you]. Indeed, it has been recorded [and permitted] in [God’s] Book.

The sixth verse of surah Ahzab says that Muslims inherit from their blood relatives rather than their brothers and sisters in faith. It also states that the Prophet’s wives must be respected as they are like mothers for believers, indicating that marriage with them after the demise of the Prophet is unlawful.

The Verse of Emulation

Indeed, there is a good example for you in [the character of] the Messenger of God; [and] for those who have hope for God, and the Last Day, and remember God much.

This verse introduces the Noble Prophet as an example and role model for all Muslims to follow. We all must emulate the Prophet’s character. The Quran has said that the Prophet possesses a great character:

And indeed you possess a great character.

We did not send you but as a mercy to all the nations.

Therefore, we all must emulate the Prophet to the best of our ability.

The Verse of Purification in Surah Ahzab

Indeed Allah desires to repel all impurity from you, O People of the Household, and purify you with a thorough purification.

The above verse is the second and last part of verse 33. It is known as the Verse of Purification. The previous part of the verse addresses the wives of the Prophet:

Stay in your houses and do not flaunt your finery like the former [days of pagan] ignorance. Maintain the prayer and pay the zakat, and obey Allah and His Apostle.

Then all of a sudden, the pronoun changes to the second person masculine plural form, unlike the first part which was the second person feminine plural form. This means that the second part of the verse is not about the wives of the Prophet, but rather it is about the household of the Prophet. This verse according to narrations from both major Islamic sects was revealed in the honor of the Prophet, Ali ibn Abi Talib, Fatimah, Hassan, and Hussain. It essentially means that these five holy individuals were immune to any form of impurities such as sins and other spiritual and physical impurities.

It has been narrated that the second part of verse 33 of the Quran has been revealed in the honor of the five infallibles, meaning Prophet Muhammad, Ali, Fatimah, Hassan, and Hussain. Prophet Muhammad was in the house of his wife Umm Salamah. The Prophet first saw Fatimah and told her that he feels a weakness in him and told her to bring him his Yemeni cloak (کساء اليماني). So Fatimah went and brought it and laid it on her father. At this moment, Hassan entered and said, “O my mother, I smell the scent of my grandfather the Messenger of Allah.” She said, “Yes he is under this cloak.” So Hassan entered and asked permission from the Prophet to join him and he consented. One by one, Hussain, then Ali, and finally Fatima went under the cloak. Then the Prophet raised his hands and prayed to Allah saying, “O Allah! These are my household. Purify them from every impurity.” Then the angel Gabriel descended and revealed the Verse of Purification. This hadith is known as Hadith of the Cloak or Kisā’.

The Verse of Invoking Blessing on the Prophet

Indeed Allah and His angels bless the Prophet; O you who have faith! Invoke blessings on him and invoke Peace upon him in a worthy manner.

Verse of Hijab in Surah Ahzab

O Prophet! Tell your wives and your daughters and the women of the faithful to draw closely over themselves their chadors [when going out]. That makes it likely for them to be recognized and not be troubled, and Allah is all-forgiving, all-merciful.

This verse is known as the Verse of Hijab because it tells the Prophet to tell his wives, daughters, and the women among the believers to cover themselves with their jilbāb. Jilbāb is a long piece of cloth that is used to cover the head, neck, and chest. Nowadays, it is known as chador. The verse states that in this way, they would be recognized and safe from the harassment of non-mahram men.

Verse of the Trust

Indeed We presented the Trust to the heavens and the earth and the mountains, but they refused to undertake it and were apprehensive of it; but man undertook it. Indeed he is most unjust and ignorant.

Exegetes of the Quran have given various interpretations for the word “Amānah,” meaning Trust. They have said that it could mean divine guardianship, intellect, free will, knowledge of Allah, and religious obligations. Whatever it is, this Trust is something very important that Allah gave to the human being. However, most human beings are unjust and ignorant and do not make good use of this trust.

Surah Ahzab is one of the surahs of the Quran that has many famous verses. It has a verse that talks about inheritance and says that believers only inherit from their blood relatives. In one of its verses, it says how we must follow the example of the Noble Prophet who possesses an excellent character. There is a verse that announces that the household of the Prophet are purified a thorough purification. Another verse is about the hijab of women and how they should draw their covering close to themselves so their heads, necks, and breasts are covered. Then there is a verse about invoking blessings on the Prophet and how it is an act that is performed by Allah and the angels. Therefore, we as believers must perform it too. Finally, there is a verse called the Verse of Trust that talks about a trust that was presented to the mountains and the earth, however, they did not accept it, yet the human being accepted it, even though he is unjust and ignorant.