Surah Nasr is one of the short surahs of the Quran that are known as Mufaṣṣalāt. It talks about the victory of the Muslims and the conquest of Mecca. God asks Prophet Muhammad to glorify God, praise Him, and ask for His forgiveness as a sign of gratitude for this great blessing, that is the conquest of Mecca and how people entered God’s religion in multitude.

Surah Nasr (Naṣr) or al-Naṣr (سورَةُ النَّصر) meaning “[Divine] help or assistance,” is the 110th chapter of the Quran which was revealed to Prophet Muhammad in Medina. This surah has two other names: Idhā Jā’a (إِذا جاءَ) and Tawdī‘ (تَديع: farewell). Surah Nasr foretells the victory of Islam by the conquest of Mecca and the allegiance of the people of Mecca to the Prophet after the Hudaybiyyah peace treaty was violated. God Almighty tells his apostle to glorify Him and ask for forgiveness as words of thanks to the Lord for this great victory.

When Allah’s help comes with victory,

and you see the people entering Allah’s religion in throngs,

then celebrate the praise of your Lord, and plead to Him for forgiveness. Indeed He is all-clement.

Occasion and Circumstances of Revelation of Surah Nasr

There are various viewpoints about the circumstances of the revelation of this surah. It is said that it was revealed:

A number of commentators and exegetes of the Quran 4 have said that surah Nasr was revealed in Medina after breach of the Hudaybiyyah peace treaty (صُلحُ الحُدَيبيَّة) in the year 8 AH/629-630 AD, a while before the conquest of Mecca. The treaty was signed in the year 6 AH/628 AD between Prophet Muhammad and the polytheists of Mecca in a region known as Hudaybiyyah. This was after the three battles of Badr (بَدر), Uhud (أُحُد), and Hunayn (حُنَين) were fought. When the Prophet and Muslims went to Mecca to perform the hajj rituals, the polytheists of Quraysh (قُرَيش) prevented them from doing so.

The Prophet sent someone to make peace between the polytheists of Mecca. Eventually, a peace treaty was signed by the two sides in Mecca for ten years. Then, the Muslims returned to Medina so that in the next year they could perform ‘umrah ( :عُمرَةnon-compulsary hajj). However, after two years, the polytheists of Mecca violated this peace treaty when the tribe of Banu Bakr (بَنو بَكر) who were the allies of the polytheists went to war with one of the tribes by the name of Banu Khuza‘a (بَنو خُزاعة) who had allied themselves with the Noble Prophet.

Conquest of Mecca as Stated in Surah Nasr

Subsequent to the breach of the Hudaybiyyah peace treaty, Prophet Muhammad mobilized a large and mighty army of 10,000 individuals from different tribes to conquer Mecca. The army comprised of the following tribes:

The Army Moves Toward Mecca

The Prophet’s great army marched toward Mecca. The Prophet was very careful that the polytheists do not become aware of their advancement. Thanks to the measures the Prophet and his companions took, the inhabitants of Mecca were unable of being informed of the Prophet’s movement.

The Polytheists of Mecca Surrender

When the prophet reached a place called Marr al-Ẓahrān (مَرُّ الظَهران), he ordered his army to light fires at different points. As a result, ten thousand fires were lit. Abu Sufyan (أبو سُفيان), the head of the polytheists of Quraysh (قُرَيش) and his agents saw the fires and were frightened. They thought one of the Arab tribes were about to attack them.

When Abu Sufyan and his men went closer, they saw that it was actually the army of the Muslims and Prophet Muhammad. As a result, Abu Sufyan was faced with no choice but to submit to the Prophet and become a Muslim. As a result, the Muslims conquered Mecca. Surah Nasr had foretold this victory and conquest.

A number of exegetes of the Quran have said that the last verse of this surah refers to God’s farewell to the Prophet. Many narrations have said that from the time of the revelation of this surah until his demise, the Prophet would say subḥanallāh (سُبحانَ الله: i.e. clear is God [from any attribution]) and astaghfirullāh (أستَغفِرالله: i.e. I seek God’s forgiveness) very much. A number of narrations state that the Prophet died from being poisoned, thus being a martyr.

The Prophet and his Companions set off for Mecca for Hajj, year: 6AH/628AD

Muslims are Prevented from Entering Mecca for Hajj

Hudaybiyyah peace treaty is signed: Ten years of peace is made

Surah Nasr is Revealed,foretelling the Conquest of  Mecca

The Prophet Mobilizes an army of 10,000 men to conquer Mecca

A Comparison Between Surah Nasr and Kausar

In both the surahs of Nasr and Kausar (كَوثَر), God grants the Prophet a gift and charges him with a duty for each gift. In surah Nasr, God grants His Prophet victory and the conquest of Mecca and asks him to glorify Him and ask for His forgiveness in return, whereas in surah Kausar, God grants him abundance, that is, a daughter by the name of Lady Fatimah Zahra. In return, God asks the Prophet to pray to Him and sacrifice a camel in celebration of this great gift. This shows the superiority of Kausar (Fatimah) over the conquest of Mecca.

The following are some benefits of reciting surah Nasr: 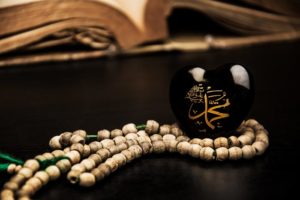 Muhammad! Why should we follow the path of the extremists? …

Repentance in the Quran

Repentance in the Quran is a recurring topic. In many …

Jonah in the Quran

Jonah in the Quran has been mentioned a number of …

Lot in the Quran

Lot (لوط) in the Quran is one of the prophets …