Home » Prophets » David in the Quran 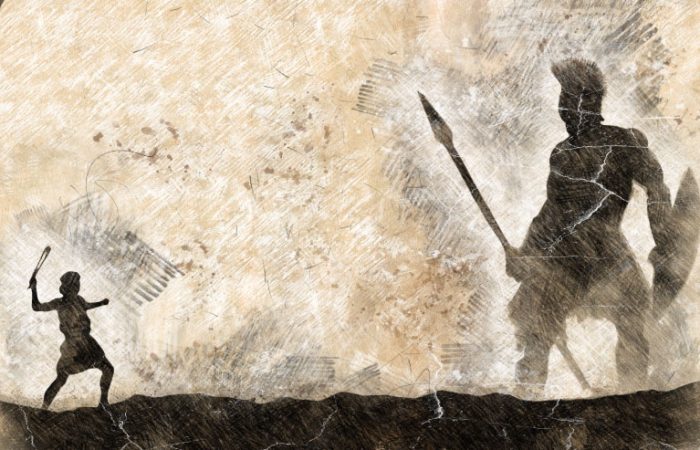 David in the Quran, is a humble servant of God whom God raises as a prophet and king to the Children of Israel. God mentions David (داوود) in the Quran as a righteous man who was also a just king. God gave him the Holy Scripture called the Psalms. David was known for his good voice. David’s name has been mentioned 16 times in the Quran. He used to recite the Psalms with his good voice and all the living beings such as birds and mountains used to accompany him. God made him the king of the Israelites. In this article on Islam4u, we will take a look at:

David in the Quran: A Young Man from the Israelites

Prophet David was not very well-known to the Children of Israel before becoming prophet and king. He was from the progeny of Prophet Ibrahim  through his son Prophet Isaac.  Prophet David lived many years after Prophet Moses . David was a warrior in the battle against the polytheists of Palestine.

David in the Quran: His Fight Against Goliath

The Quran mentions the fight between David and Goliath :

And David killed Goliath, and Allah gave him kingdom and wisdom and taught him whatever He liked. 1

Goliath was a giant man and a champion who was very strong and no one was a match for him, until David used his slingshot and a rock to strike his forehead and kill him. Then God  made David a king because of his heroism and gave him wisdom, which here means prophethood. Therefore, David became a prominent figure among the Israelites and they accepted his rule over them.

David in the Quran: His Prophethood and Kingdom

After the prophethood of Moses and Joshua, certain prophets came to guide the Israelites who were known as “judges.” The last judge was reportedly the Israelite prophet Samuel whom the Children of Israel had asked him to appoint a king for them. As a result, Samuel said that their king shall be Saul (طالوت). At the time of Saul, a heavy battle took place. The enemies had a champion named Goliath. Saul promised whoever kills Goliath shall have half of his wealth and will give his daughter in marriage to him. Prophet David killed Goliath and became the son-in-law of Saul. David was the first king of Palestine who was also a prophet.

It is said that Luqman the wise was a contemporary of Prophet David and used to advise him and David praised him.

David in the Quran: The Psalms

The name of the book that God revealed to David was the Psalms. The Psalms contains a series of advice, maxims, and supplications to God Almighty. The name of this holy book has been mentioned thrice in the Quran. One of the things that has been said in the Psalms is about the end times and how the righteous will inherit the earth. The Quran makes mention of this:

Certainly We wrote in the Psalms, after the Torah: ‘Indeed My righteous servants shall inherit the earth.’ 2

Moreover, God in the two other verses states the following:

We have indeed revealed to you as We revealed to Noah and the prophets after him, and [as] We revealed to Abraham and Ishmael, Isaac, Jacob, and the Tribes, Jesus and Job, Jonah, Aaron, and Solomon—and We gave David the Psalms— 3

Your Lord knows best whoever is in the heavens and the earth. Certainly, We gave some prophets an advantage over the others, and We gave David the Psalms. 4

David in the Quran: His Good Voice and Miracle

David had a very good voice. The Quran mentions this fact:

Certainly We gave David our grace: ‘O mountains and birds, chime in with him!’ And We made iron soft for him, 5

His voice was so good that the birds and mountains would recite with him. In this verse, God says that He made iron soft for him. This means he would be able to make coats of mail by bending and shaping cold iron, whereas people usually use hot molten iron to make armors and coats of mail. The Quran continues:

Saying, ‘Make easy coats of mail, and keep the measure in arranging [the links], and act righteously. Indeed I watch what you do.’ 6

So Prophet David miraculously made armors and coats of mail with iron using his bare hands. This was one of the miracles of David that God had given him. Another verse also talks about this miracle:

We taught him the making of coats of mail for you, to protect you from your [own] violence. Will you then be grateful? 7

The Judgment of David in the Quran

Prophet David was a wise prophet of God whom God had granted wisdom and “conclusive speech”:

We consolidated his kingdom and gave him wisdom and conclusive speech. 8

God mentions two of the judgments of David in the Quran. The first one is as follows:

And [remember] David and Solomon when they gave judgement concerning the tillage when the sheep of some people strayed into it by night, and We were witness to their judgement.

We gave its understanding to Solomon, and to each We gave judgement and knowledge. 9

The story goes that one day a man went to Prophet David and said: The sheep of someone went inside my orchard and ate all my grapes and now I have come to make my complaint to you. Prophet David knew the answer, but instead he gathered all his children and told them to be the judge.

However, none of them could answer except his son Solomon, who later became his successor and the prophet of God and king of the Israelites. Solomon said: The sheep of that man must be given to the owner of the orchard so that he can use their wool, milk, and meat until the orchard gives fruit once again. Then, he can give back the sheep to its original owner, and he must not pay anything for the sheep. In fact, as the verse says, God made Solomon understand the judgment.

David in the Quran: The Second Judgment

God mentions the second judgment of David in the Quran in the following verses:

Has there not come to you the account of the contenders, when they scaled the wall into the sanctuary?

When they entered into the presence of David, he was alarmed by them. They said, ‘Do not be afraid. [We are only] two contenders: one of us has bullied the other. So judge justly between us, and do not exceed [the bounds of justice], and show us the right path.’

‘This brother of mine has ninety-nine ewes, while I have only a single ewe, and [yet] he says, ‘Commit it to my care,’ and he browbeats me in speech.’

He said, ‘He has certainly wronged you by asking your ewe in addition to his own ewes, and indeed many partners bully one another, except such as have faith and do righteous deeds, and few are they.’ Then David knew that We had tested him, whereat he pleaded with his Lord for forgiveness, and fell down in prostration and repented.

So We forgave him that, and indeed he has [a station of] nearness with Us and a good destination.

God wanted to test David and see how he would judge. However, when the first contender said the second one took 99 sheep and left one for me, David immediately passed his judgment without hearing what the second contender had to say. After making this judgment, David himself quickly found out that he was being tested and repented to God. Of course, this doing of David was not a sin, but an act known as tark al-awlā’ (ترك الاولی) that means it would be better if he had abandoned it. This is because prophets of God are infallible and never commit any sins or error. Besides, the verse praises David and says he was spiritually near to God and had a good destination.

Ultimately, Prophet David, after ruling over the Children of Israel for forty years, passed away at the age of 100. 10