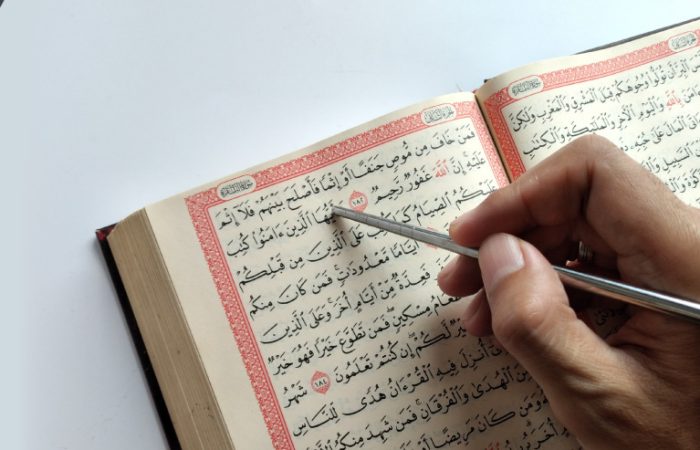 Reciting the Quran is superb, but to read the Quran beautifully is another level. There are certain rules for reading the Quran that the reciter must observe. They constitute a branch of Quranic science known as tajweed (تَجْوِيد), which literally means the beautification of the Quran in terms of the way the letters and words are pronounced. In this article on Islam4u.pro, we will explain some important points about tajweed and take a look at some of the most important rules of tajweed of the Quran. They are the three keys to achieving a good Arabic accent and thus good tajweed. If you read this article you will hopefully learn Quran with tajweed.

The topics that will be discussed in this article are:

Learn to Read the Quran

Tajweed is the advanced level of reading the Quran. Therefore, it is essential and a prerequisite for us to learn to read the Quran properly to ideally begin learning tajweed.

Learn Quran With Tajweed: Difference Between Tajweed and Recitation

There is a difference between reading and reciting the Quran without tajweed and with tajweed. If you just recite the Quran, you may not be observing certain precise rules that make your recitation sound better and more proper. On the other hand, if you want to recite the Quran with tajweed, you must learn certain rules to perfect your recitation and make it sound more eloquent and with an accent that sounds like authentic Arabic.

Indeed, when you recite the Quran without tajweed, you are still observing some rules of tajweed such as the pronunciation of the letters and vowels, the madd (مَدّ) or lengthening of long vowels, and so on. However, tajweed is a more advanced version of reciting the Quran that has many more rules that you must learn to beautify your recitation.

How to Familiarize Oneself With Proper Tajweed Recitation

Learning tajweed of the Quran is an easy task but requires time and effort. Therefore, to learn tajweed, one must learn it both theoretically and practically. The theories and abstract rules of tajweed can be learned in many ways such as:

Perhaps the most practical and easy route for learning tajweed of the Quran is through enrolling in an online course on tajweed. This is because of the constraints that exist today, such as the difficulty of finding a good tajweed teacher, especially in non-Muslim countries. Moreover, participating in conventional classes requires you to follow a fixed time and commute to the place the classes are held every day or week. Online courses remove all of these constraints.

We, at Islam4U have developed a comprehensive course for you to get started. Then comes practicing those theories in your recitation of the Quran and having them confirmed by a good tajweed teacher. Let us now look into a few important rules of tajweed that we like to call the three keys to the Arabic accent and good tajweed.

First Key for Learning Quran With Tajweed: Correct Pronunciation of the Arabic Vowels

What does that mean? It means that there are three short vowels. If you double the sound of each of these short vowels, they would become the three long vowels. The short vowels are:

The long vowels are:

Learning the correct sound of fatḥah and alif al-madd is most important and determines how well a person’s Arabic accent is because kasrah and ḍammah and their equivalent long vowels are relatively easy to learn. To pronounce, fatḥah, the mouth opens slightly and an ‘a’ sound that sounds a little inclined to the English ‘e’ as in “best” is made. Kasrah makes an ‘ee’ sound as in “bee” but it is shorter in duration and length. Finally, ḍammah makes an “oo” sound like in the word “boot” but with about half the duration. It should go without saying that the best way of learning the Arabic vowels is listening to qualified professional reciters of the Quran and emulating the way they pronounce the vowels. This takes quite some practice. And, you know what they say: Practice makes perfect.

Second Key for Learning Quran With Tajweed: Places of Articulation of Letters

It is an obvious fact that learning the sound of consonants or letters in the alphabet of a language is just as, if not more important than learning the vowels. In Arabic, learning and mastering the correct pronunciation of the letters can prove more difficult than learning the vowels. This is because every letter has a unique individual sound that is hard to make for non-Arab speakers. In other words, there are no two letters that have the same sound unlike some other languages such as English. So, given the fact that there are 28 letters in the Arabic alphabet, there are also 28 different sounds for each of these letters.

Third Key for Learning Quran With Tajweed: Tafkhīm and Tarqīq

Learning Tajweed Better by Tarqīq of the Letters

One of the best ways of practicing proper tajweed is reciting the Quran before a master of tajweed. This can be done in person with a qualified teacher of tajweed. The teacher tries to correct your tajweed problems as you recite verses of the Quran in tartīl (تَرتيل) or taḥqīq (تَحقيق) style. Read the “How to Read Quran” article to know more about these two styles.

So, this is the best way of practicing proper tajweed. It is hoped that by learning Quran with tajweed, we enjoy our own recitation and others enjoy it too, insha’Allah. Feel free to enroll in our tajweed course, which is called “Learn Tajweed.” It is only $17. We assure you that this course will prove highly beneficial.