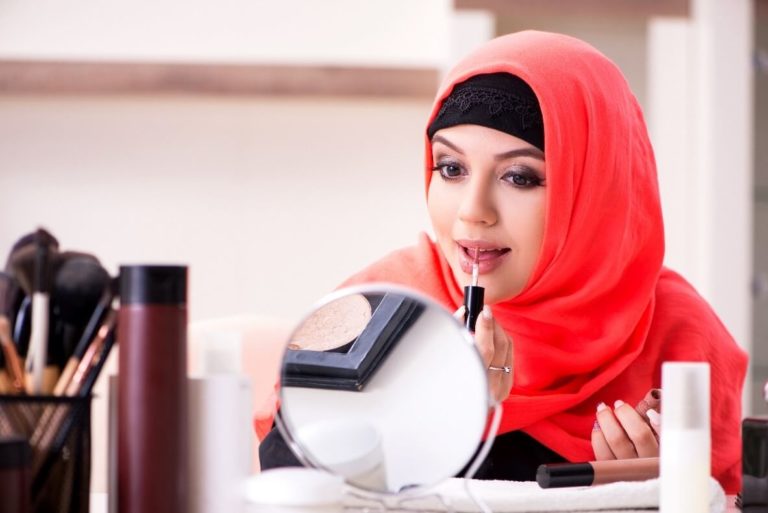 Makeup: Why Is It Not Allowed for a Woman to Wear Makeup in Public?

Some Muslim women completely cover their hair and body when they go out of their homes, but you see them wearing makeup like lipstick, foundation, eyeliner, and mascara. Is that okay?

If that is your question too, don’t miss this article.

What Does the Quran Say About Wearing Makeup?

Many practicing women have this concern because of what they have read in surah Nur:

And not to display their charms, beyond what is [acceptably] visible1

Interpreters of the Quran have said, “what is [acceptably visible]” means the hands up to the wrist and the face. Based on this verse, a woman is not allowed to show her adornments, including makeup and jewelry to non-mahrams.

What we mean by makeup and jewelry will be explained in further detail.

There is an extended discussion on how women should appear in society in our online course, “An Islamic Guide to Women’s Role in the Family” in the lesson “How Should One Appear in Society?”

Well, three points need to be considered to answer this question:

Let us answer these questions one by one.

How Much Makeup Are We Talking About?

You could be using three layers of crème, foundation, and powder, then there could be a red blush or a blush that is very natural and neutral. Then comes the lipstick with the same story.

Almost everyone agrees that catchy and sexy makeup that attracts any random guy’s attention in the street is considered unlawful and haram, even if you have totally covered your hair and body.

How about very light makeup? By light makeup, we mean the colors used are natural and neutral and very close to your own natural skin color and lips. Well, there is not a single answer to that question. Based on the view of your marja‘ al-taqlīd, the answer varies.

Who Is a Marja‘ al-Taqlīd?

Who is a marja’ al-taqlīd? Marja‘ literally means reference or source. Practically, a marja‘ al-taqlīd is your reference for religious issues. He is the highest-ranking authority in a Muslim community who has studied religious law for years and can give his expert opinion on matters in the daily life of people when they encounter a religious or shar‘ī question.

What Does Your Marja‘ Say About Wearing Makeup?

“Makeup applied in any quantity is prohibited and must be covered from the sight of a non-mahram.”2

Elsewhere, he states that only kohl or collyrium is allowed for a woman and no other makeup is permissible for her when appearing in public.

Another jurist or marja‘ al-taqlīd’s verdict is that wearing light makeup which does not attract attention is allowed. This includes lip and brow tattoo provided that it is light and neutral and would not be the source of any corruption.

So catchy and heavy makeup is considered haram by all marja‘s. However, regarding wearing light makeup, refer to your marja‘ to find his verdict on the issue.

To find out more about ahkam, we have a useful online course on ahkam that we recommend.

Are Women Allowed to Wear Jewelry When Appearing in Public?

By jewelry, we mean rings, necklaces, and bracelets. According to a marja‘ like Ayatollah Sistani, only wearing rings is allowed provided that she does not fall into haram activities and does not intend to excite non-mahram men by wearing them.

Wearing a necklace where your neck and chest would be shown is obviously not permitted unless you wear your neckless on your shirt and no skin is exposed. Here again, you have to see the verdict of your marja‘.

Can I Wear Perfume When I Appear in Public?

It is forbidden for a woman to wear perfume and appear in public when it is noticed by non-mahram men. In a hadith, Prophet Muhammad (S) says that the woman who wears perfume and leaves her house is cursed by the angels until she returns home.3

Why Can’t Women Wear Makeup and Perfume in Public?

Hijab is one of the sub-branches of modesty (حَياء: ḥayā’). Men and women are advised to practice modesty, which helps them abstain from wrong actions or thoughts. In fact, modesty is a kind of self-control or taqwa (piety).

Modesty helps men and women to guard their private parts. For this to happen, non-mahram men and women regulate their relationship with each other. How? By observing hijab.

So when you have a scarf on, yet wearing perfume and a tight-fitting outfit and are flirting with guys, you are not observing hijab and are not acting modestly.

Now, hijab is not just the piece of cloth a woman wears on top of her head to cover her head. It is how she covers her body parts. Whether a woman uses makeup, perfume, and jewelry in public is also a part of observing hijab. It is how she walks, talks with, and looks at non-mahrams.

When Are Women Allowed to Wear Makeup?

The desire to look beautiful is very strong in women. Women like to dress up and be praised for their beauty. Islam sees this desire and appoints a proper place for it which is the family.

Many narrations strongly advise women to wear their best clothes, adornments, and makeup for their husbands.

For instance, once a woman came to the Prophet (S) and asked,

“What are the rights of a husband concerning his wife?” He replied:

After all, spouses are to be a source of peace and love for one another as the Quran says,

And of His signs is that He created for you mates from your own selves that you may take comfort in them, and He ordained affection and mercy between you. There are indeed signs in that for a people who reflect.4

So all that sexy makeup, beautiful clothes, and jewelry need to be reserved for one’s husband to strengthen spousal relationship and in turn the family. The sad story is that we see a man and woman dressed up, showered, and perfumed when they want to leave the house but not for each other.

Men also have the duty to be clean, perfumed, handsome, and well-dressed for their wives, and they must satisfy their wives’ emotional and sexual needs.

A great lesson in our online course “Ways to Establish Strong Family Bonds” talks of the importance of beautification and makeup for a woman in her spousal relationship.

John (یحیی) in the Quran is a prophet who was …

Moses in the Quran

Moses (موسیٰ) is one of the greatest prophets of God … 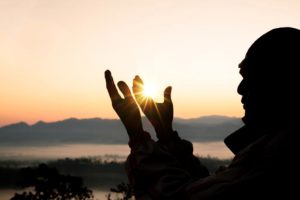 God, the most merciful, extends His mercy over His creation. …

Surah Jinn (سورة الجن) is one of the chapters in …