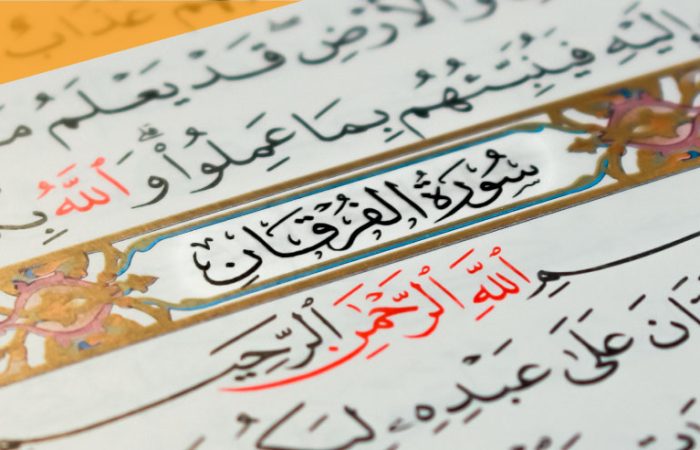 Surah Furqan (سورة الفرقان), also known as Tabarak (تبارك),  is the 25th surah of the Quran that Allah revealed to Prophet Muhammad in the city of Mecca. The surah gets its name, Furqan, meaning criterion, or something that separates the truth from falsehood from the first verse that says, “Blessed is the one who sent down the Criterion to His servant that he may be a warner to all nations.” In this article on Islam4u, the following topics will be discussed:

The Gist of Surah Furqan

Furqan means separator of the truth from falsehood. Surah Furqan discusses topics such as monotheism, Qiyamah, prophethood, and fighting idolatry and its final verses talk about the qualities of true believers. Moreover, surah Furqan contains verses about:

The Occasion of Revelation of a Few Verses of Surah Furqan

As for the occasion of revelation of verse seven of surah Furqan, some exegetes have said: A group of people among the disbelievers went to the Prophet to speak with him and tell him that if he wants wealth they will give it to him. However, the Prophet rejected them and said that that which he has brought is not for wealth, kingdom, or fame, but rather Allah has given him the duty of warning and giving good news to people and convey His message. Then the disbelievers said, “How come an angel does not accompany you, or why has not Allah given you a garden or palace to make you needless? Therefore, verse 20 of surah Furqan was revealed saying:

And all the messengers We sent before you [were human being like you, so they] ate food and walked in the markets [too]. And We test some of you with another [to see] whether you exercise patience [or not]. And [you should know that] your Lord is All-Seeing.7

So Allah tests some of you with another to see whether you are patient or not. That is, if Allah wanted He would give his Messenger the whole world so that they would not oppose him anymore.8

Verse thirty of surah Furqan is a very famous verse of the Quran. It reads:

And the Messenger will say, “O My Lord! Indeed, my people abandoned [and disregarded] this Qur’ān.”9

And it is He who brings two seas together, one of them is sweet and favorable and the other is salty and bitter, and He placed a barrier between them lest they mingle.10

This verse speaks about one of the wonders and powers of Allah. There are two seas that are brought together, yet they do not mix. One is sweet while the other is bitter and salty. Allah has placed a barrier between the two seas so they do not mingle. This is truly one of the miracles of Allah. There really is such a thing in the real world. For example, the Baltic Sea and the North Sea meet, but their waters do not mingle.

He, who created the heavens and the earth and whatever is between them in six days, and then settled on the Throne, the All-beneficent; so ask someone who is well aware about Him.11

The content of this verse has been repeated in six other verses with some differences. Most exegetes agree that by days, Allah means periods of time, not 24 hours. What is meant by Allah settling on the Throne is that He began managing His creation.

Surah Furqan talks about Prophet Moses and Aaron and introduces the people of Noah as a group of people who denied prophets and ultimately drowned in the flood. It also mentions the people of ‘Ād, Thamūd, and Rass, introducing them as people who suffered divine punishment. Likewise, verse 40 speaks about the fate of the people of Prophet Lot.

Surah Furqan is a surah that contains very useful information. Furqan means separator of the truth from falsehood. Surah Furqan discusses topics such as monotheism, resurrection, prophethood, and fighting idolatry and its final verses talk about the qualities of true believers, namely the Servants of the All-beneficent. One of the benefits of reciting surah Furqan according to the Noble Prophet is that one will be resurrected on the Day of Judgment while one has faith in the Day of Judgment and the resurrection of the dead from their graves. One will enter paradise without being held accountable for one’s deeds.