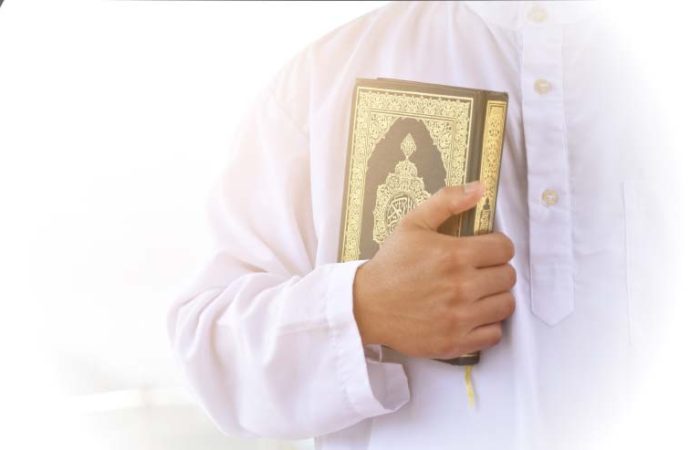 The Quran is the Holy Scripture of Muslims that God revealed to His final prophet, Muhammad (s). Muslims very much respect the Quran because it guides Muslims to the right path and helps them solve their problems in their daily lives. God revealed the Quran in Arabic. For this reason, Muslims must become familiar with the language of the Quran and learn it so that they are able to recite the words of Allah the way it is meant to be recited, that is, in the original language, Arabic.

New Muslims’ Questions Regarding the Components of the Quran

New Muslims might have many questions regarding the Quran especially its components such as:

Surah or chapter is a group of verses that begin with Bismillahi al-Raḥmāni al-Raḥīm, briefly known as bismillah. The way you know that a surah has ended is to see if there is another bismillah after the last verse. However, there is one surah, al-Tawbah that does not begin with bismillah. Moreover, a surah by the name of al-Naml (النّمل) has an extra bismillah in the middle of the surah. There are 114 surahs in the Quran.

What is an Ayah or Verse?

An ayah is a verse of the Quran that is indicated by a number at the end of it. For example, if the number 5 comes after a verse, it means that that ayah is the 5th ayah of the surah.

The Two Types of Verses of the Quran for New Muslims

When interpreting the Quran, it is important to know that there are two types of verses in the Quran. In fact, the verses of the Quran have been classified as being either Muḥkamāt, meaning definitive verses, and Mutashābihāt, meaning allegorical verses.

It is very important that New Muslims, upon coming across the allegorical verses, they refer to the interpretation, commentary, and exegesis of the Ahl al-Bayt (اهل البَيت), peace be upon them. That is because understanding those verses are difficult and the meaning might be confusing. God Almighty has said that only those who are “firmly grounded in knowledge”1 know the true interpretation of these verses and they are indeed the Ahl al-Bayt.

New Muslims Ask About the Quran: What is a Juz?

A juz is a section of the Quran that contains a number of surahs. The surahs of the Quran can be in the same or different juz. There are thirty juz in the Quran.

Translation of the Quran for New Muslims

Tafseer of the Quran for New Muslims

In fact, tafseer is a deeper explanation of the verses of the Quran and allows one to fully comprehend the verses of the Quran. Tafseer explains things such as where God revealed different surahs and verses, the occasion and context of revelation, and many other things that cannot be understood simply by reading the translation.

Quran is a Miracle for Converts

How does a convert become a Muslim? There can be different things that cause a non-Muslim to convert to Islam. Undeniably, the Quran is an everlasting miracle of the final Prophet. In fact, a new Muslim may have embraced Islam after appreciating the miraculous nature of the Quran such as:

When a convert sees all of these undeniable miracles of this heavenly book, he just cannot help but to profess his faith in the noble religion of Islam.

How Can a New Muslim Relate to the Quran?

A person who has embraced the illuminant religion of Islam has done so for various reasons. Above all, something caused him to relate to the Quran. To illustrate, Christians believe in Lady Mary and Jesus. The Quran has a lot of information and descriptions about these two personalities.

There is a chapter in the Quran by the name of “Maryam” (مَريَم). In this chapter, the story of the birth of John and Jesus is told. As a result, when a person who wants to become a new Muslim reads these verses and sees the similarities with his own religion, albeit, something that is pure and unadulterated, he accepts Islam.

Just imagine it, more than 1400 years ago, how could a man who was untaught know all of these reports of the Unseen, as the Quran itself calls it, and how is it possible that it is so precise and detailed? A new Muslim has realized this and this has caused him to embrace Islam.

The Quran is Light and Guidance for New Muslims

A person who has just become a Muslim has many difficulties and hardships ahead of him. He may not know many laws and principles in Islam and is in need of help from others. However, other than individuals who can help converts, the Quran itself is also a light and means of guidance for new Muslims.

Moral Lessons in the Quran for New Muslims

In reality, the Quran contains many useful moral lessons that could help anyone, not just explanation about religious laws. For example, in surah Luqmān (لُقمان), the wise man Luqman gives certain pieces of advice to his son. Anyone can benefit from the advice of Luqman by reading the verses that contain it, especially new Muslims. As an illustration, Luqman said to his son:

Does the Quran Suffice for New Muslims?

A big question is: Is the Quran by itself enough for Muslims to know everything about Islam and its rulings? The answer is no. To explain, the Quran does not talk about how one should pray or perform certain other rituals. In fact, the Quran itself has said that if you want to know more about religion, ask the Prophet, and he will explain the rulings that are not mentioned in the Quran:

O you who have faith! Obey Allah and obey the Apostle and those vested with authority among you. And if you dispute concerning anything, refer it to Allah and the Apostle, if you have faith in Allah and the Last Day. That is better and more favourable in outcome. 3

Therefore, Muslims must obey not just Allah but also the Prophet, and those who have authority meaning the Imams and successors of the Prophet because obeying them is just like obeying God the Exalted.

New Muslims Are Intrigued by the Quran’s Scientific Miracle

Many converts were actually scientists who noticed that the Quran is completely in line with what modern science has proven to be true today. For instance, one of these scientists and physicians was Professor Maurice Bucaille who converted to Islam after witnessing so many scientific facts and parallels in the Quran with modern science.

Professor Bucaille was interested in studying the mummies of Egyptian kings or pharaohs. Once, one of the mummies he was inspecting had remnants of salt in his body. Therefore, he came to the conclusion that this pharaoh was drowned in the sea. When he heard that the Quran had mentioned that God would preserve the body of the Pharaoh after drowning him, he researched into Islam and then converted to the illuminant religion of Islam after noticing the parallel that existed.

Many converts embraced Islam after reading verses about the human embryo and its development in the womb. One of those new Muslims was Professor Bucaille. The Quran states:

Certainly We created man from an extract of clay.

Then We made him a drop of [seminal] fluid [lodged] in a secure abode.

All of the stages that the fetus goes through mentioned in the Quran is exactly what really happens when observed with advanced scientific devices. Therefore, the Quran is truly a miracle and the word of God.

The Quran as a Means of Tranquility for New Muslims

There are times when people are in great hardship and they are in a critical emotional state. Furthermore, people sometimes become depressed and/or anxious in life. In fact, they are in need of something to provide them with a peace of mind and tranquility.

Reciting the verses of the Quran, that is, as mentioned in our narrations, tantamount to listening to God Almighty, will definitely provide us with tranquility and peace of mind. Perhaps converts are more aware of this fact than those who are Muslim by birth because it was the Quran that guided them and brought them closer to God the Exalted. That is why God has said in the Quran:

God has said in the Quran the following regarding the believers and their ever increasing faith in God Almighty:

The faithful are only those whose hearts tremble [with awe] when Allah is mentioned, and when His signs are recited to them, they increase their faith, and who put their trust in their Lord. 6

It is an interesting fact that converts and new Muslims usually have stronger faith in God and Islam than Muslims by birth. Like the verse says, believers, that is, true believers are those whose faith increases when the Quran is recited to them.

The Duty of Muslims by Birth Toward New Muslims

A person who is Muslim by birth and is a religious and practicing Muslim must help those who have recently converted to Islam. They must teach them things they need to know including religious laws, acts of worship, and the Muslim culture. In other words, they should teach them how to make wudu, how to pray, how to fast, and so forth.

Moreover, they should teach them how in Islam men should not look at and interact unacceptably with non-Mahrams, that is, women whom one is not allowed to touch or see their ornaments for not being related to them or otherwise. New Muslims must be treated well lest they are disillusioned by their reversion to Islam.

The Quran is a holy book that is for all people of all religions. Those who wish to act according to the Quran must submit to God and embrace the Islamic religion. New Muslims must learn the Quran in terms of reciting it, knowing its content and meaning, and implementing it in their daily lives.

The Quran is very beneficial to New Muslims especially because it contains many lessons and is a source of tranquility and peace of mind. Other Muslims must help converts to align themselves with the Quran and the teachings of Islam and the Ahl al-Bayt, peace be upon them.