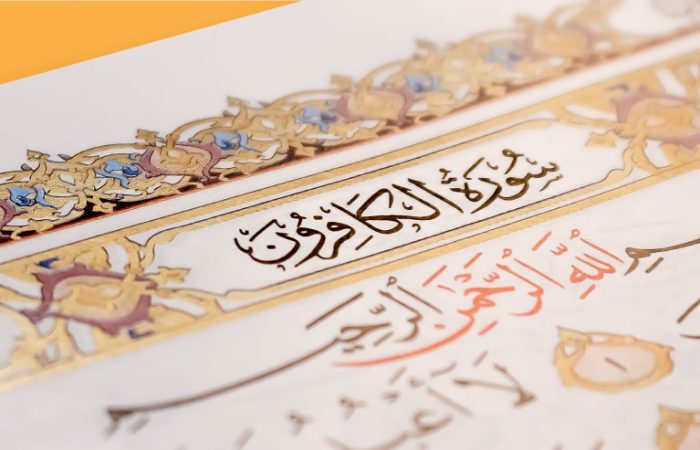 Surah Kafirun (الکافِرون), meaning disbelievers, also known as ‘Ibādah (عِبادة) [worship] and Jaḥd (جَحد) [denial], is the 109th surah and one of the short chapters of the Quran located in juz’ 30 that God revealed to Prophet Muhammad in Mecca. In surah Kafirun, God instructs the Noble Prophet to tell the disbelievers that he would never believe in and follow their religion and worship what they worship, and neither would they ever follow his religion and worship his God.

Surah Kafirun, aka ‘Ibādah (عِبادَة) [worship] and Jahd [denial], is the 109th surah of the Quran that God revealed to Prophet Muhammad in Mecca. A group of disbelievers and polytheists of Mecca offered a deal to the Prophet: Worship our gods for some time and we will worship your God for some time. God revealed surah Kafirun to tell the Prophet that he will never do such a thing and neither will they ever worship God.

I do not worship what you worship,

nor do you worship what I worship;

nor will I worship what you have worshipped,

nor will you worship what I worship.

To you your religion, and to me my religion.’

Occasion and Context of Revelation

Once, a specific group of polytheists and idolaters of Mecca from the tribe of Quraysh including individuals such as Waleed ibn Mughayrah (وَلید ابنِ مُغيرَة), ‘Āṣ ibn Wāli‘ah (عاصِ ابنِ والِعَة), and others said to the Prophet, “O Muhammad! Let us make a deal. Follow our religion and worship our deities and idols for a while, and we too will worship your God and follow your religion for a while.” At this instant, God revealed surah Kafirun to the Prophet ordering the Prophet that he would never do that and that they would not fulfill their promise either.

In fact, these surahs instruct the Prophet to say something, either to people (such as disbelievers in surah Kafirun), as a means of confessing God’s oneness (surah Ikhlas), and seeking refuge in God from evil (surah Falaq and Nās).

Another key point is that surah Kafirun is actually foretelling the future. To explain, Arabs use the word lā (لا), which is a word of negation, before a verb to indicate that such an action will never happen in the future, whereas they use the word mā (ما) to negate something in the present. Therefore, those disbelievers who said that they would worship the God of Muhammad were lying. In other words, they would never have worshipped God Almighty even if their condition was met, which of course was impossible.

It is important to realize that verses of the Quran are not only contradictory to one another, but also complement and further explain each other. Analogous to surah Kafirun, God has said in various verses of other surahs in the Quran that certain groups of disbelievers shall never believe in God and follow the true religion of Islam. As an illustration, God says in verse six of surah Baqarah (البَقَرَة):

As for the faithless, it is the same to them whether you warn them or do not warn them, they will not have faith.

A point often overlooked is that there is a major difference between disbelievers who are ignorant and those who have knowledge of the truth. To clarify, many people may know what the truth is and that God must be worshipped as the only deity and Lord of the universe. Nevertheless, they refuse to admit it, follow His commandments, and abide by His laws. As a matter of fact, this is kufr (کُفر) in the true sense of the word. Kufr is an Arabic word that is translated as disbelief. However, it is interesting to know that kufr literally means to cover or hide something.

For the same reason, kufr is sometimes synonymous with its derivative kufrān (کُفران) that means taking something for granted, such as a blessing, or generally being ungrateful of something. Therefore, kufr means that there is a covering or veil between that person and God that deprives the individual from benefiting from that knowledge. Given these points, the Quran states:

The word has certainly become due against most of them, so they will not have faith.

Indeed We have put iron collars around their necks, which are up to the chins, so their heads are upturned.

And We have put a barrier before them and a barrier behind them, then We have blind-folded them, so they do not see.

It is the same to them whether you warn them or do not warn them, they will not have faith. 5

All in all, some disbelievers know the truth in that God is one, yet they refuse to admit it, even verbally.

A Misconception About Verse Six of Surah Kafirun

Some people think that when at the end of this surah, God tells the Prophet to say, “To you your religion and to me my religion,” it means that people are free to choose polytheism or disbelief over Islam, or that the Prophet has nothing to do with the polytheists and disbelievers in terms of inviting them to Islam. In fact, the last verse of surah Kafirun is saying that the Prophet will never be inclined to them and neither will they accept Islam. 6

One of the Imams has said, “Whoever recites surah Kafirun a hundred times on the eve of Friday, he will see the Messenger of God, peace be upon him and his progeny, in his dream. 10

2. Satan Being Shun From the Reciter of This Surah

The Noble Prophet has said, “Whoever recites surah Kafirun, God will shun Satan from him and will grant him ease on Qiyamah.” 11

The Prophet has said, “Whoever recites surah Kafirun ten times during sunrise and then says a prayer, God will answer his prayer.” 12

4. Surah Kafirun as One of the Four Quls

There are four specific surahs that begin with qul, meaning say. As was noted, these surahs are:

Narrations state that by reciting these surahs dispels the evil eye and sorcery. Moreover, it serves as protection for one’s:

It is also very common for these four surahs to be written and hung on the wall of houses as a means of protection from evil.

In conclusion, learning about and reciting surah Kafirun is very important, just as learning the entire Quran is important, so that we will never be among the disbelievers and polytheists, God willing.