Worship in the Quran

Worship in the Quran is an act of showing gratitude, respect, and total submission to God. God has said in the Quran that human beings must only worship Him. Of course, worshipping God is not only the act of standing in prayer, bowing down, and prostrating, but also involves how one’s conduct is throughout one’s life, in that it should be for the sake of God. That is when all of our actions would be an act of worship. In this article, we will take a look at:

Worship in the Quran: We Should Only Worship God

Allah tells us that we should say the following in the very first surah of the Quran, surah Fatiha:

We repeat this verse and the whole of surah Fatiha ten times every day in our prayers. The lesson that this verse is giving us is that we should only worship our Lord and creator and we should ask help only from Him. In fact, God is teaching us how we should speak to him, because it is said that praying is like speaking to God while reciting the Quran is listening to God.

Of course, some have said when reciting surah Fatiha, even though the pronouns are first person, one must not intend to say them as his or her own words, but rather as God’s words that he or she is simply reciting. As an illustration, think of it as a king who has composed a poem praising himself in the words of another person and then asks someone to read that poem in his presence.

The person who is reading the poem is using first person pronouns such as I or we to praise the king, but the poet is the king himself and therefore the poem must be read in such a way that its poet is the king, not the person who is reading it. The same applies when we recite surah Fatiha in God’s presence (i.e. in prayer). It is God who has revealed these verses, we are merely the reciters. So we should not think these verses are our own words even if they are in first person.

Worship in the Quran: Prayer is the Highest Act of Worship

O you who have faith! Bow down and prostrate yourselves, and worship your Lord, and do good, so that you may be felicitous. 2

Undoubtedly, prayer is the highest act of worship. Prayer is one of the pillars of religion. If religion is the body its head is prayer. Without the head, the body would be rendered useless and dead even.

Therefore, a person who claims to worship God yet does not pray is telling a blatant lie. Moreover, it is important to perform the prayer at the right time and not to delay it intentionally until its time is almost past. God has said in the Quran:

The prayer is indeed a timed prescription for the faithful. 3

Therefore, the person who cares about his prayer and gives importance to it, before everything else performs his prayer when the adhan is chanted in the initial hours of its due time. One of our Imams has said, the intercession of the Ahl al-Bayt is not inclusive of those who take their prayer lightly.

This great Imam of ours means that we do not forsake our prayer for worldly acts and occupations by delaying it and sacrificing it for the sake of other things.

Worship in the Quran: Worship God So You Become Godwary

O mankind! Worship your Lord, who created you and those who were before you, so that you may be Godwary 4

Godwariness can only be achieved if man worships God Almighty, the creator of the universe. It is impossible to call someone who does not worship God a Godwary person as it is paradoxical. A Godwary person must show his Godwariness by worshipping and serving God. In fact, the key to Godwariness is the worship of God.

A person who does not pray and thus does not worship God will never become Godwary, even if he claims it. Besides, prayer has many benefits that aids one to become Godwary such as preventing one from committing sins and indecencies:

Recite what has been revealed to you of the Book, and maintain the prayer. Indeed the prayer restrains from indecent and wrongful conduct, and the remembrance of Allah is surely greater. And Allah knows whatever [deeds] you do. 5

Worship in the Quran: Worshipping God is the Goal of Creation

I did not create the jinn and the humans except that they may worship Me. 6

God explains in this verse that the main objective, goal, and incentive of the creation of man and jinn is so that they may worship Him. This shows the significance of worshipping God that the whole point of being created is worshipping God, everything else is either a preliminary to it or a diversion.

Of course once again, the idea of worshipping God does not solely mean standing in prayer and performing salat, although that is the most obvious manifestation of worshipping God, but it also means serving God, obeying Him, and submitting to His will.

The best way of doing all of this is performing that which He has made obligatory for us such as the wājib acts, and refraining from the things He has forbidden us from doing such as committing sins and indecencies. In this way, we have fulfilled the goal of creation and have thus become Godwary.

Worship in the Quran: Worship of God and Shirk Are Contradictory

Worship Allah and do not ascribe any partners to Him. 7

Shirk, or ascribing partners to God is the greatest sin that God has said He will never forgive. Shirk nullifies a person’s good deeds including his or her worship of God. That is why God has asked us to only worship Him as the one and only God who has created everything, has power over everything, and manages the affairs of the universe. If a person does shirk, he is worshipping or acknowledging the idea that something besides God has influence other than God, whereas it is only God who has influence on the activities of the world. Therefore, it is necessary to believe in monotheism and worship only God and no one else.

Worship in the Quran: Do not Worship Satan

‘Did I not exhort you, O children of Adam, saying, “Do not worship Satan. He is indeed your manifest enemy. 8

Those who refuse to worship God in fact worship Satan, because that is what Satan wants. They are obeying Satan and are his slaves instead of being slaves of God. Those who commit sins and do not perform their obligatory acts, those who do not believe in God, and those who ascribe partners to God are all worshippers of Satan. Their abode is hell and a painful punishment awaits them. However, the door to repentance is always open and these people can turn to God, worship Him, and prosper in both worlds.

Worship in the Quran, specifically the worship of God is the goal of creation of the universe. By worshipping God, one becomes Godwary and achieves the loftiest spiritual stations. The key to worshipping God is obeying all His commands, that is, performing all the obligatory acts and refraining from all the forbidden ones. It is hoped that we are included among those who are the true worshippers of God Almighty, God willing.

John (یحیی) in the Quran is a prophet who was … 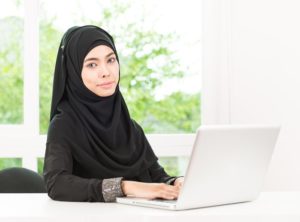 Why Do Women Wear Hijab?

What! Hijab (ḥijāb)? Why do women wear hijab in Islam? …

Hell and Heaven in the Quran

One of the reasons for the establishment of the Qiyamah …

The Bible in the Quran

Shirk in the Quran

Shirk in the Quran is a sensitive topic.­ Shirk (شِرك) …