Surah Masad is one of the short surahs of the Quran in Juz’ 30, with only 5 verses. It is the 111th surah revealed in Mecca after Muhammad (S) was ordered to invite his relatives to Islam. It explicitly mentions the name of one of the adversaries of the prophet who was in fact his uncle and predicts the fate of this unbeliever and his wife.

Surah Masad (Arabic: مسد) also called Surah Tabbat (Arabic: تَبَّتْ) and Abi Lahab (Arabic: أبی لهب) is the one hundred eleventh surah of the Quran in Juz’ 30, with 5 verses and 22 words. The content of the surah deals with Abu Lahab, the paternal uncle of the messenger of God (S) and one of his adversaries. Surah Masad takes its name from verse 5 in which the phrase “حَبْلٌ مِّن مَّسَدٍ” meaning ‘a rope of palm fiber’ is mentioned. This rope shall be twisted around the neck of Abu Lahab’s wife in hellfire as she used all her efforts to oppose and torture Muhammad (S).

Perish the hands of Abu Lahab, and perish he! 1

Neither his wealth availed him, nor what he had earned.

Soon he will enter the blazing fire,

and his wife [too], the firewood carrier,

with a rope of palm fiber around her neck.

In this article you will read:

There are distinct qualities, blessings and benefits in the different chapters of the Quran. Just as each fruit or vegetable provides unique kinds of vitamins and nutrients, the Quranic chapters do the same.

One who recites surah Masad for a pain, will have one’s pain healed.2

Being in God’s protection

The recitation of surah Masad at bedtime leads to one being under the safety and protection of God.3

Occasion of revelation of surah Masad

Abu Lahab was Abdul Muttalib’s son and Muhammad’s uncle who was one of the heartless adversaries of the prophet of Islam. When the verse

Warn the nearest of your kinsfolk. 4

Was revealed, Muhammad (S) went on top of Safa hill and invited his close relatives to Islam for the first time, warning them of the chastisement of the hereafter. Abu Lahab’s response was “you have called us for this?” “May you perish”. That is when surah Masad was revealed, returning to Abu Lahab his own curse.5

Perish the hands of Abu Lahab, and perish he!

The tone of surah Masad was so bitter and condemning that came as a heavy strike to Abu Lahab and confound him to the home until he died. Surah Masad taught the rest of the unbelievers a good lesson and left them threatened lest the same would happen to them.

What does it mean not to join Abu Lahab in his eternal abode?

As mentioned earlier in this article, one of the blessings of reciting surah Masad is to be included in the prophet’s prayer not to be among Abu Lahab’s team dwelling in the hellfire and to be among the ones residing in heaven. What does it mean? Can one do as he/she pleases in this world and hope to become among the residents of Paradise by the mere recitation of a surah of the Quran?

Let us answer this question through the noble Quran.

Delve deep into the Quran

In different parts of the Quran, we are invited to contemplate and delve into the depth of the luminous Quranic verses and to deduce teachings by which we can find our path in life.

Do they not contemplate the Quran? 6

Elsewhere it is stated:

[This is] a blessed Book that We have sent down to you, so that they may contemplate its signs, and that those who possess intellect may take admonition. 7

Why does God curse Abu Lahab in Surah Masad?

Perish the hands of Abu Lahab, and perish he!

Hands are tools and means through which one strives to attain one’s aim in life. The perishing of one’s hands means that one’s attempts would end fruitless. In other words, however much one struggles, he/she would obtain nothing. Moreover, the perishing of one means that one would forever be deprived of felicity and salvation which is perpetual annihilation. 9

The very first verse of surah Masad distinctly displays the standpoint of the Quran with regards to the figure explicitly mentioned by name, Abu Lahab, the paternal uncle of Muhammad (S). When you openly curse him, you disassociate yourself from his creed in life.

History attests that when the messenger of God (S) was inviting people to the one God, Abu Lahab would refute him from his back and throw stones at his nephew.10 He never stopped opposing the prophet. He and his wife used shameless words against Muhammad, perhaps that is why the noble Quran mentions these two people by name, defaming them once and for all.

At times the pilgrims of Mecca came to Abu Lahab to ask about Muhammad (S) and he would say to them that we are busy curing his madness.11

Whose creed do you support?

Based on the Quranic ideology, one has to define one’s position and approach in life. Whose adherent are you? Whose ideology do you propound? Abu Lahab’s or the prophet’s?

When in prison, prophet Yusuf (AS) says to the two who had asked the interpretation of their dreams from him:

Indeed, I renounce the creed of the people who have no faith in Allah and who [also] disbelieve in the Hereafter. 12

Following in the prophet’s footsteps in surah Masad

So let us assume that we disassociate our self with “the people who have no faith in Allah” and associate ourselves with God and His messenger, Mohammad (S). This entails following in the footsteps of the noble prophet as God says in His holy book,

O ye who believe! Obey Allah, and obey the Messenger, and those charged with authority among you. 13

That which the prophet asks us

The noble prophet Mohammad(S) endeavored to guide people to worship the one and only God for 23 years and as a reward of all these years of hard work he wants one thing from us:

‘I do not ask you any reward for it except the love of [my] relatives.’14

In an enlightening narration15 we read,

Is religion anything other than love? Do you not see that God says in the Quran,

Say, ‘If you love Allah, then follow me; Allah will love you and forgive you your sins,16

Who should enjoy unique privileges?

In some communities, once you belong to a specific race, political group or family such as the royal family, you would enjoy certain privileges and rights regardless of your personal qualities and traits; nevertheless, the criterion of the Quran for privileges and superior rank is different.

You could be an Arab from the esteemed tribe of Quraish, more important than that, have an honorable father such as Abdul Muttalib and a nephew such as the Prophet (S) however, when you do not follow the command of God, you are warned of the divine punishment just like the other disbelievers, perhaps even more than others, if your behavior is worse than them.

Soon he will enter the blazing fire,

The opposite is valid as well. You may not be among the Apostle’s relatives and be from a totally different race and language, however, if you are a true believer of God and practice His instructions, you would be regarded as one of the family members of the messenger of God (S). Based on a beautiful narration, Prophet Muhammad (S) said about Salman Farsi:

“Salman is one of us Ahlul-Bait”17

Lessons to learn from surah Masad

Neither his wealth availed him, nor what he had earned.

Elsewhere in the Quran we read,

As for the faithless, neither their wealth nor their children shall avail them anything against Allah; it is they who will be fuel for the Fire.18

Abu Lahab’s wife collected firewood and twigs and tied them with a rope of palm fiber on her back. She would then put them on the prophet’s path to hurt him as he was passing there. Hence, God says in surah Msad that in the Hereafter, she shall be the firewood of hell and those ropes of palm fiber would be hung from her neck.19

and his wife [too], the firewood carrier,

Moreover, we read in historical accounts that she had a pricy necklace about which she had sworn she would spend it in the way of opposing Muhammad (S). So surah Masad depicts her state in the hereafter with a rope around her neck:

with a rope of palm fiber around her neck.

For the love of Him, they feed the needy, the orphan and the prisoner. 20

Allah cites an example of the faithless: the wife of Noah and the wife of Lot. They were under two of our righteous servants, yet they betrayed them. So they did not avail them in any way against Allah, and it was said [to them], ‘Enter the Fire, along with those who enter [it].’ 21

Dunya in the Quran

What does Islam say about the worldly life or Dunya …

Dua in the Quran

Dua in the Quran (دعاء) is an intriguing topic. The … 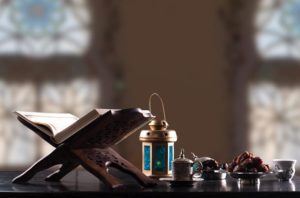 Verses of the Quran About the Month of Ramadan

God Almighty revealed the Noble Quran, the book of guidance, …

Hijab in the Quran

Islam is a comprehensive religion which covers all aspects of …

The Importance of Knowledge in the Quran

The word ʿilm (علم) which is the Arabic word for …