Mary in the Quran

Mary or Maryam is the only lady whose name has been mentioned 34 times in the Quran in 12 chapters. There is an entire chapter with the name of this noble lady to honor her and refute all the false accusations made against her by her people.

The Glorious Quran includes verses about her mother, the vow she made before Mary’s birth, her childhood, devotion and worship to God, her getting pregnant and giving birth to Jesus, and the accusations against her of committing fornication.

How Many Times Is “Maryam” Used in the Quran?

The name “Maryam” is used 34 times in 12 chapters of the Noble Quran. In some, her name alone has been mentioned; in others, the name ‘Isa bin Maryam has been cited, which references Jesus as her son.

Where Is Maryam Mentioned in the Quran?

The name Maryam has been used in the following chapters and verses:

The Story of Mary in the Quran

The Quran mentions the story of Maryam in three phases:

The Birth of Maryam

Hanna (Saint Anne), the wife of ‘Imran, becomes pregnant and vows to devote her child to serving God.

When the wife of Imran said, ‘My Lord, I dedicate to You in consecration what is in my belly. Accept it from me; indeed You are the All-hearing, the All-knowing.’ 1

Unlike her expectation, she gives birth to a daughter and not a son. But God knew better what she had in her belly.

The wife of Imran names the baby Mary and makes a beautiful prayer:

‘I commend her and her offspring to Your care against [the evil of] the outcast Satan.’2

God answers the prayers of Mary’s mother and accepts Mary with a gracious acceptance.

Thereupon her Lord accepted her with a gracious acceptance, and made her grow up in a worthy fashion. 3

Who Took Care of Mary?

When Mary was born, her father ‘Imran, an Israelite prophet from the lineage of Prophet David, had passed away. Her mother took her to Bayt al-Muqaddas so Mary could devote her life to the service of God.

A dispute arose among the priest as to who should care for Maryam.

He charged Zechariah with her care. 5

Every time Zechariah visited her in the sanctuary, he would find special provisions with her. He would ask her, ‘O Mary, from where does this come for you?’ She would reply, ‘It comes from Allah. Allah provides whomever He wishes without any reckoning.’6

At that moment, Zechariah prayed to God for a good offspring.7

The Birth of Jesus (‘Isa)

The Noble Quran beautifully mentions the story of Mary becoming pregnant with the command of God as the angel Jibreel (Gabriel) appears to her in the form of a handsome man to give her the good tiding of a pure son. She is puzzled as a virgin girl not touched by any man. God Almighty states that this son will be a sign for mankind and a mercy from Him.8

Maryam withdraws to a distant place with the baby in her womb. The birth pangs start, and she rests by the dried trunk of a palm tree. The pains get very strong, and she wishes she had died before this and had become all forgotten.

She said, ‘I wish I had died before this and become a forgotten thing, beyond recall.’ 9

Her Lord consoles her and makes a spring flow under her feet and provides her with fresh dates.10

Of course, Mary is in a tough and challenging situation. How can she go back to her people? What should she tell them about the child she has given birth to? God again comes to her help and tells her that if any person approaches her, she should tell them that she has fasted and cannot speak to anybody.

Mary brings ‘Isa to her people

She took the baby to her people who were all shocked by what they saw.

They start reproaching her by telling her that neither her father nor her mother were unchaste and bad people. She remains quiet and only points at her son.11 But how can a baby speak?

With the power of God, the baby speaks:

He said, ‘Indeed I am a servant of Allah! He has given me the Book and made me a prophet. 12

Isa (AS) mentions important divine teachings to his people:

The Quran also states that Jesus is not a son of God but the word of God, His servant, a spirit from Him, and an apostle. Moreover, it denounces the idea of the trinity and stresses the oneness of God and monotheism. 14

Maryam was the daughter of ‘Imran (Joachim), son of Mathan (Matthat), son of Solomon, son of David, son of Yishai, son of Yahoza, son of Jacob, son of Isaac, son of Ibrahim.

Nine Qualities of Mary in the Quran

The Glorious Quran mentions Lady Maryam in 12 different chapters. It makes sure that her personality is highly honored as a truthful humble servant of God and a role model for all believers.

1. An Example for All Believers

In the last verse of surah Tahrim, Allah the Almighty mentions two women as examples for believers, men and women alike. One of them is the Pharaoh’s wife and the second is Mary, Imran’s daughter.

2. Chastity of Mary in the Quran

Chastity is a quality where you let your reasoning rule over your desires. Chastity is the fruit of modesty. Chastity could be practiced in three realms: one’s stomach, private parts, and tongue. In other words, what one eats, with whom one establishes an intimate relationship, and what one says.

Lady Maryam was chaste in all three realms. In surah Tahrim, Allah (SWT) talks specifically about the purity of her womb and how she was blessed with the spirit of God.

And Mary, daughter of Imran, who guarded the chastity of her womb, so We breathed into it of Our spirit. 15

In a beautiful narration, we read that on the Day of Judgment, a beautiful sinful woman is brought to the presence of her Lord. She goes on and says that the reason she fell into the trap of sins and occupation was that God had created her a beautiful human being. Then Lady Maryam is brought in, and God asks the woman, “Which one of you is beautiful? You or this lady? We created her beautiful, yet she did not become sinful.”16

3. She Confirmed the Words of the Lord

Allah (STW) in surah An’am mentions the excuses that the polytheists bring to deny monotheism and the Messenger of God. One of their claims was that they did not believe in the words and Books of Allah sent to His Apostles.17 As a matter of fact, this was because they did not regard Allah with the regard due to Him. The exact opposite is said about Maryam:

She confirmed the words of her Lord and His Books. 18

This is an indication of her level of understanding of her Lord.

4. An Obedient Servant of God

The term Qanit (قانت), meaning one who humbly and continuously worships Allah, has been referred to both men and women in the Quran concerning virtuous servants of God. This term has been used about Maryam twice:

And she was one of the obedient. 19

O Mary, be obedient to your Lord and prostrate and bow down with those who bow [in worship]. 20

The second verse follows God’s informing Maryam that she has been chosen as the best woman of both worlds. Hence, she is to give thanks to Him and show her gratitude.

Mary has been referred to in the Quran as truthful.

The Messiah, son of Mary, is but an apostle. Certainly, [other] apostles have passed before him, and his mother was a truthful one. Both of them would eat food. Look how We clarify the signs for them, and yet, look, how they go astray! 21

6. She Is Chosen Above the Women of the World

Mary was chosen as the best woman of the worlds.

and He has chosen you above the world’s women. 22

7. She Is Purified by God

Mary was chosen and purified by God.

And when the angels said, ‘O Mary, Allah has chosen you and purified you. 23

Whenever Zechariah visited her in the sanctuary, he would find provisions with her. He said, ‘O Mary, from where does this come for you?’ She said, ‘It comes from Allah. Allah provides whomever He wishes without any reckoning.’ 24

9. The Angels Spoke to Mary

When the angels said, ‘O Mary, Allah gives you the good news of a Word from Him. 25

The personalities mentioned in the Quran are our role models in life. What can we learn from the story of Mary in the Quran?

Her entire life was at the service of Her Lord. Many false accusations were made against her, yet she remained firm in her belief and bore all the hardships. And in the end, God made her name last in the book of history for all generations to come.

Types of Knowledge in the Quran

There are many types of knowledge in the Quran. Some …

Nature in the Quran

Nature in the Quran has been talked about in many …

What Is Darul Quran?

You might have encountered the word “Darul Quran” (دارُ القُرآن) …

The Bible in the Quran 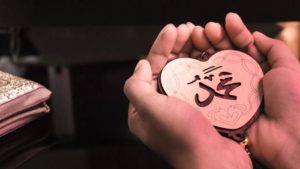 Praise of Prophet Muhammad in the Quran

Prophet Muhammad is the final prophet Allah sent to the …