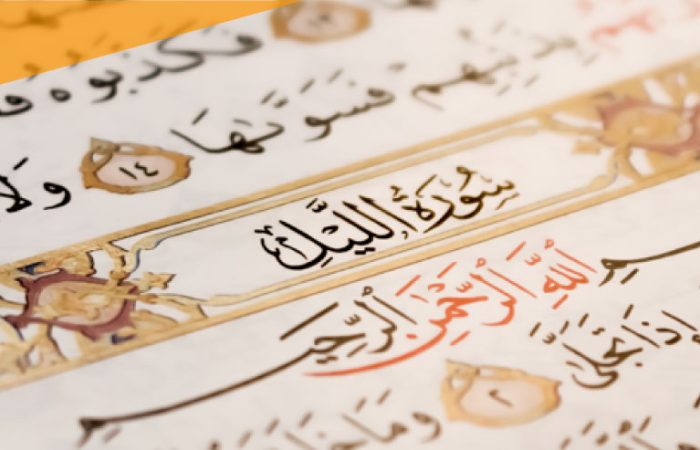 Surah Lail or as it is also known, Surah Wal Laili Iza Yaghsha (وَاللَّيْلِ إِذَا يَغْشَىٰ), is the 92nd chapter of the Quran and discusses the important topic of the good and bad actions. It also discusses where these two types of actions rise from, i.e. what beliefs are the cause of these actions and their result in the Hereafter.

The 92nd chapter of the Quran, Surah Lail discusses important topics like miserliness and charity in the way of Allah and the reasons why the virtuous believer is charitable to attain God’s pleasure and what miserliness in this regard is a sign of. It also describes God’s help to the believers in performing this and other good actions while for the disbelievers it is harder to do good actions.


The topics discussed in this article are:

By the night when it envelops,

By the day when it brightens,

By Him who created the male and the female:

Your endeavors are indeed unlike.

As for him who gives and is God wary

And confirms the best promise,

We shall surely ease him into facility.

But as for him who is stingy and self-complacent,

And denies the best promise,

We shall surely ease him into hardship.

His wealth shall not avail him when he perishes.

Indeed with Us rests guidance,

And indeed to Us belong the world and the Hereafter.

So I warn you of a blazing fire,

Which none shall enter except the most wretched

He who denies and turns back.

The God wary shall be spared it

He who gives his wealth to purify himself

And does not expect any reward from anyone,

But seeks only the pleasure of his Lord, the Most Exalted,

And, surely, soon he will be well-pleased. 1

It has been narrated from the Holy Prophet (peace and blessings of God be on him and his household):

“He who recites it (Surah Lail) Allah awards him so much so that he is satisfied, and He protects him from toil,
and makes (the path of his life) smooth for him.” 2

Occasion of Revelation of Surah Lail

Musa bin Isa al-Ansari narrates that I was sitting with Amirul Mo’mineen Ali bin Abi Taleb (peace be upon him) one day after praying behind the Prophet (peace be on him and his household) when a man came to him and said he needed him to come with him for something. Ali (peace be on him) asks him to tell him what the issue is.

The man narrates that I live in a man’s house and there is a date palm there. Due to the wind its dates fall to the ground and I and my children eat from those dates without shaking the tree or making the fruits fall in any way and I would like you to come with me and talk to the owner in this regard (i.e. to forgive him for doing so).

Helping the One Seeking Help

They both go the owner and though Ali (peace be on him) tries to pacify the man and asks him to forgive the person he does not agree even when he tells him that I guarantee you on behalf of the Prophet that you will be rewarded with a garden in Paradise in return for the tree. Finally the Imam tells him that he will sell him a particular garden of his in return for the house. The man agrees and Imam Ali then gifts the house to the poor man and his family.

The Result of Good and Sincere Actions

The next morning after the morning prayers, Gabriel came to the Prophet with a revelation and he addressed the people and said: who among you performed an action that God has narrated today? Will you tell me or should I tell you? Ali bin Abi Taleb said to him: O Prophet of God! You tell us.

The Prophet said that Gabriel had some down to him and informed him that Ali had performed an action last night. He asked him what action, whereupon he was asked by the angel to recite. When he asked what he should recite, the angel asked him to recite Surah Lail (from start to finish). The Prophet informs Ali (peace be upon him) that the chapter was revealed for him. 3

Like many other chapters, Surah Lail also begins with oaths. The oaths mentioned are the following:

He draws the night’s cover over the day

Your endeavours are indeed unlike.

The word ‘sa‘y’ (سعي) refers to an action that is performed with utmost effort. 5

This verse of Surah Lail is the consequent to the previously taken oaths and indicates that your actions are always different; some actions are for Hell and some are for Heaven. 6

God states in this verse that I swear by these realities that are different both in creation as well as in effect, that your actions are also different in these two aspects. 7

In What Respect are Actions Different?

According to the verses of Surah Lail, Some of them are virtuous, generous and affirmative and have particular effects and some are disdainful, stingy and negative and they also have effects special to them. 8

This is indicated in the coming verses.

As for him who gives and is God wary

And confirms the best promise,

The word ‘a‘ta’ (أعطي) in this verse refers to giving wealth to attain God’s pleasure and God-wariness that is mentioned after it is an explanation for this giving which helps us understand that this giving is in the way of religious piety. 9

The word ‘husna’ (حسنی) is an attribute that is in place of its noun and apparently the sentence potentially says: and confirms the best promise; whereas this promise is not apparently mentioned in the Arabic verse; rather, its attribute is mentioned but it is itself potentially there.

We shall surely ease him into facility.

The easing into facility mentioned in Surah Lail can have two possible meanings:

It seems that this second meaning conforms more to the promises in the Quran. 11

But as for him who is stingy and self-complacent,

And denies the best promise,

We shall surely ease him into hardship.

These verses are describing the state of a person who is in contrast to the previous charitable, generous and pious person who tries to attain God’s pleasure and believes in God’s unity, His prophets and Qiyamah.

Qualities of the Evil-doers Mentioned in Surah Lail

The person who is stingy is so because he wishes to become needless and wealthy through his stinginess. 12

The Contrast of Ease and Hardship

The word ‘usr’ (عسر) mentioned here is in contrast to the ‘yusr’ (یسر) mentioned for the virtuous in previous verses.

This is state that makes it difficult for a person to perform good actions; as is mentioned in other verses too:

… and whomever He desires to lead astray, He makes his breast narrow and straitened as if he were climbing to a height.

As a result, it becomes hard for a person to perform good actions. 14

His wealth shall not avail him when he perishes.

Indeed with Us rests guidance,

And indeed to Us belong the world and the Hereafter.

Outcome of Actions in the Hereafter

According to Surah Wal Laili iza Yaghsha, virtuous actions and evil actions both have their own effects in the Hereafter and the verses that follow discuss these two different effects.

The Outcome of Denial according to Surah Lail

So I warn you of a blazing fire,

Which none shall enter except the most wretched

He who denies and turns back.

These verses are announcing the outcome of stinginess and denial of the Hereafter; i.e. the result of these actions is nothing but Hellfire.
Therefore, God is warning and frightening the people from being such and become of the inhabitants of Hell.

Denial here includes both the denial of the Hereafter as well as prophet-hood. This denial makes a person an instance of “wretchedness”. The wretched in this verse encompasses all the disbelievers and those entitled to punishment. 16

The Outcome of the Virtuous

The God wary shall be spared it

He who gives his wealth to purify himself

The word ‘ittaqa’ (اتقی) in the verse refers to anyone who is more virtuous than another and is more wary of dangers and risks; there are some who are only God-wary in respect to corruption of wealth, others are God-wary in that they wouldn’t kill another human being, while others who are afraid of poverty do not give charity in God’s way and others who are God-wary, do so for His pleasure. 17

The most virtuous among these groups of people is the one who is wary of God and gives his wealth in His way, i.e. he avoids the loss of the Hereafter and that is the purpose for why he does so. 18

The Verse is General

Since the word ‘ittaqa’ is described by the sentence who gives his wealth, it shows that the verse is general and doesn’t apply only to a particular group.

This is because this attribute is a general matter and this is in no conflict with the fact that Surah Lail may be revealed due to a particular event. 19

Only for God’s Pleasure

And does not expect any reward from anyone,

But seeks only the pleasure of his Lord, the Most Exalted,

The person who gives in God’s way does not do so because he wants to repay God’s blessings upon him and nor is it due to some right that someone else has over him. 20
The only reason he does give charity is to attain God’s pleasure. 21

And, surely, soon he will be well-pleased.

The verse indicates that the virtuous person, the ‘ittaqa’ mentioned in previous verses of Surah Lail, will soon be pleased by receiving the abundant and beautiful blessings that his Lord will give him.

In the previous verse God has been praised with two attributes:

This is to show that what has been given as a reward – which is the greatest and most valuable of rewards – is a requisite of God’s Lordship and in keeping with His high status and is not proportional to the value of the servant’s act (which is, in fact, not worthy of such reward). 22

The chapter begins with a few oaths, namely on the day and night with specific attributes as well as on God who created the male and female. It then delves into different actions and their different effects.

The good actions discussed in this chapter are giving charity for God’s pleasure and its source which is belief in unity of God’s Lordship and Divinity and the Hereafter, as well as in prophet-hood and the prophetic messages.

On the other hand bad actions like stinginess and miserliness in giving in the way of Allah rises from the denial in the Hereafter and disbelief in God’s prophet.

The chapter ends with describing the reward of the charitable God-wary and punishment of the miserly disbelievers.

There are also many narrations regarding spending in God’s way that have been mentioned in relevant books.