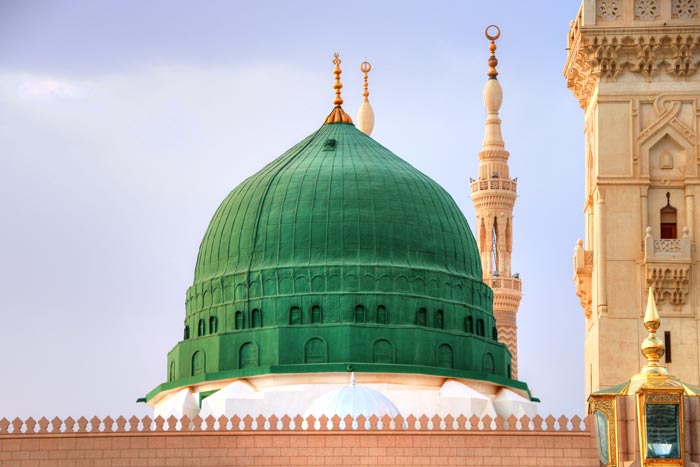 The Birth of Prophet Muhammad (s)

The Noble Prophet of Islam came to this world to eradicate atheism and polytheism and introduced a religion based on monotheism (Tawheed) that forever changed the course of history. One of the issues upon which Muslims of different denominations have discoursed is the birth of Prophet Muhammad (s). In this article on Islam4u, the following topics will be discussed:

When Was the Prophet Born?

All Muslims agree that the Prophet (s) was born in the month of Rabi al-Awwal in a year known as the year of the elephant (circa 670 CE). This was the year the army of Abraha was destroyed when trying to attack the Kaaba with elephants. Based on historical narrations, the foreign king had confiscated the camels which belonged to Abd al-Muttalib, the grandfather of Prophet Muhammad (s) and the chief of one of the most prominent tribes of Arabia. Upon discovering this, Abd al-Muttalib approached Abraha and demanded that his camels be returned. Abraha, who thought Abd al-Muttalib had come to negotiate for the safety of the sacred Kaaba, belittled his request.

As a response, the true essence of Abd al-Muttalib’s firm monotheistic belief shone through as he replied, “I am the guardian of the camels, and the house of Kaaba has its own guardian who will protect it.” We all know what happened next. Allah destroyed the army of elephants by sending a swarm of small birds with hard-baked clay in their beaks and talons that threw the stones at the army and destroyed it.

Where Was the Prophet (s) Born?

The Noble Prophet (s) was born in Mecca, Arabia, to a privileged family of the Quraysh known as Banu Hashim. The house where he was born was in a place called Shi‘b of Abu Talib. For centuries, people honored that house and commemorated the birth of Prophet Muhammad near and inside it. However, in recent years, the extremists who control that region demolished that house for at least two reasons. First, they say asking to be blessed by a place attributed to prophets and other holy figures is forbidden in religion (shirk/polytheism). Second, they say holding celebrations commemorating the Prophet is an innovation to religion (bid‘ah). However, nowhere in the Quran or hadith can one find anything about the prohibition of holding celebrations commemorating the Prophet (s) and the Ahlul Bait (a).

The Events on the Eve of His Birth

Many strange things happened on the night before the birth of Prophet Muhammad (s). The Taq of Kasra (a building resembling a castle) shook, and fourteen of its turrets collapsed. The fire of the Fars Fire Temple went out after 1000 years. Moreover, Lake Saveh dried out, and the Zoroastrian priests and the Sassanid king had strange dreams that spoke of the birth of Prophet Muhammad (s).

Who Were the Prophet’s (s) Parents?

History shows that the Prophet’s mother, Amina, had no milk. Therefore, he was entrusted to a woman named Haleema al-Sa‘diyyah (حَليمة السعدية). She nursed the Prophet for two years. She saw many blessings in her life, which she attributed to Muhammad (a). For this reason, when Muhammad was two years old, and she was to give him back to his mother, she pleaded with Amina to let him live with her a little while longer. She also told Amina that Mecca was not safe for children as a cholera epidemic swept Mecca. Amina granted her request.

His mother passed away when the Prophet (s) was four or six years old (depending on the historical account). Abd al-Muttalib took him under his care, and after him, the Prophet’s uncle, Abu Talib, took care of him and raised him. The Prophet’s parents, uncle (Abu Talib), and forefathers until Adam were all monotheists and believers in Allah.

Abu Talib wanted to go on a business trip to Syria. He decided to take the young Muhammad (s) with him. When they reached a city called Busra, they stopped there to rest and have some food and drink. A priest named Bahira saw certain signs in the caravan. He noticed that a cloud was always above them. This was a sign of prophethood. Jesus also always had a cloud above him that shaded him. Bahira asked them to come to eat in the monastery. However, the caravan left Muhammad (s) to stay outside to protect their belongings. Bahira did not see anything special in the members of the caravan. Therefore, he asked them, “Is there anyone besides you?” They said that Muhammad (s) was with them. Muhammad (s) went to see Bahira. Bahira noticed all of the signs of prophethood in Muhammad (s) when he asked him a few questions. He also saw the unique mark of prophethood between his two shoulders.

Bahira told Abu Talib to take good care of Muhammad (s) and guard him against the Jews. He said that if they knew who Muhammad (s) was, they would kill him out of jealousy. The Jews wanted the last prophet to be from their ancestors and not from the descendants of Prophet Ismail (a). Therefore, they wanted to kill the Prophet (s).

Prophet Muhammad (s) was born in the year of the elephant (‘Ām al-Fīl) circa 570 CE, on Rabi al-Awwal 17th in Mecca, to a noble Arab tribe named Banu Hashim. His father was Abdullah ibn Abd al-Muttalib, and his mother was Amina bint Wahab. When his mother and father passed away, Abd al-Muttalib, and after him Abu Talib took him under his care. On one of the business trips to Syria, a Christian priest named Bahira foretold that Muhammad would one day become a prophet and lead humanity to salvation. May Allah’s peace and blessings be upon our Noble Prophet and his pure progeny.

Battle of Uhud has been referred to on several occasions. …

Surah Kahf (سُورةُ الكَهِف), meaning the cave, is the eighteenth …

Events of the Qiyamah in the Quran

There are many events that will take place on the …

Anger in the Quran

When was the last time you got angry? Why did …

Marriage in the Quran

Marriage in the Quran is a concept that requires our …