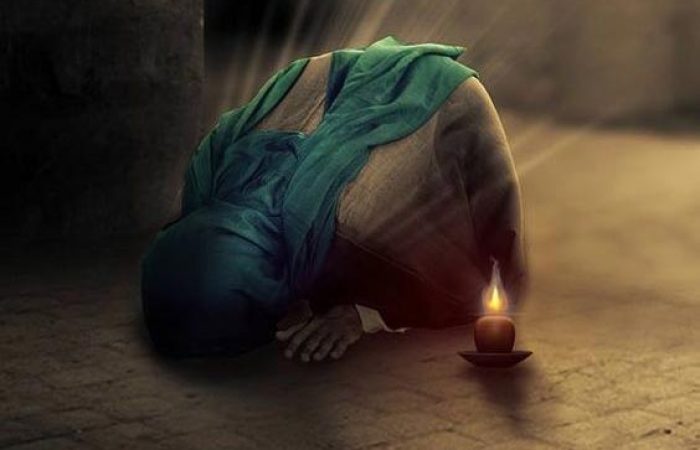 Imam Ali ibn al-Hussain, also known as al-Sajjad and Zayn al-‘Abidin (a), is the fourth Shiite Imam. He was the son of Imam al-Hussain (a) and the father of Imam Muhammad al-Baqir (a). This article intends to overview the life and character of this noble Imam.

He was known as al-Sajjad because he used to prostrate very much, and Zayn al-‘Abidin, meaning the beauty of worshippers. His kunyah (کُنيَة) or teknonym was Abu al-Hassan, just like his grandfather Imam Ali (a).

His Life in Medina

Imam al-Sajjad was born during the time of Imam Ali ibn Abi Talib (a). He was two years old when his grandfather Imam Ali (a) became a martyr. Furthermore, he witnessed the imamate of his uncle Imam al-Hassan (a) at a young age. He was a witness to the injustices and crimes of Mu‘awiyah. Not much else has been said in history about his life in Medina before the event of Karbala.

Imam al-Sajjad (a) in Karbala

After the martyrdom of Imam al-Hussain (a) and his companions, the enemies attacked the tents and took the women and children as well as Imam al-Sajjad (a) captive. Imam al-Sajjad was still ill. They put shackles on his hands and feet and made him mount a saddleless camel so that he would suffer even more. Like his aunt Zainab, Imam al-Sajjad (a) delivered an enlightening speech in Damascus in the court of Yazid. After all, he was the grandson of the Commander of the Faithful Ali (a) and took after his eloquence and oratory skills.

Imam al-Sajjad’s (a) Speech in the Court of Yazid

The people of Syria were not that much familiar with the Sunnah of the Prophet (s). They were not very informed about him and his Ahlul Bait (a). Therefore, Imam al-Sajjad (a) introduced himself to them and said how he is the son of the Prophet (s), Imam Ali (a), Lady Fatima (a), Lady Khadija (a), and Imam al-Hussain (a). He said how his father was not after causing sedition among Muslims but rather rose to reform the affairs of Muslims and get rid of the innovations that Yazid and his father introduced to Islam. In this sermon, he also described and talked extensively about Imam Ali, whose character was assassinated by the Syrian rulers, such as Mu‘awiyah. Imam al-Sajjad’s eloquent and enlightening speech instilled fear in the hearts of Yazid and his men and turned the tables.

Imam al-Sajjad’s supplications and whispered prayers have been compiled and named al-Ṣaḥīfat al-Sajjādiyyah (الصَحيفَةُ السَجادِيّة), meaning the Psalms of al-Sajjad. The book contains 54 supplications of Imam al-Sajjad (a). After the Quran and Nahj al-Balagha, it is considered the most important Shia source. Every Imam sought to guide their followers using unique methods. Imam al-Sajjad’s way of spiritually training people was through these very supplications.

For example, in one of the excerpts of this book, Imam al-Sajjad (a) says, “O Lord! Send your greetings to the pure ones among the Ahlul Bait of Muhammad (s). They are the ones whom You chose for government; the treasures of Your knowledge; the guardians of Your religion; Your caliphs on earth; and Your authority on Your servants. You made them pure and free from every filth and contamination by Your will, and a means to reach You and Your eternal heaven.”

In this supplication, Imam al-Sajjad emphasizes the right of the Ahlul Bait (a) to rulership over Muslims. He states the reason why they deserve such a position, too. They are pure and infallible from every sin and error, they are highly knowledgeable, they guard the religion of Allah, and they are Allah’s caliphs on earth and His authority over His servants. Therefore, this supplication has a politico-religious motive. Many other similar supplications have such motives behind them.

Risālat al-Ḥuqūq, meaning the Treatise on Rights, is another hadith attributed to Imam al-Sajjad (a). It talks about fifty rights that one should observe, such as rights concerning Allah, leaders, body parts, relatives, and acts of worship, such as prayer, fasting, hajj, sacrifice, and sadaqah. This hadith has been proven authentic through its chain of narrators, mainly because it is reported by Abu Hamza al-Thumali, one of the trusted followers of the Imam.

Imam al-Sajjad (a) is called al-Sajjad, a word from sajdah because he used to prostrate very much. He used to prostrate for every good thing that happened. Likewise, he is called Zayn al-‘Abidin, the adornment or beauty of worshippers, because of his states during worship. For example, he was filled with awe during prayer such that he would go pale and would tremble. He used to pray a thousand units of prayer (raka‘āt) each day. It has been said that he had calluses on his seven places of sajdah, particularly his forehead and kneecaps, owing to praying very much.

Imam al-Sajjad (a) would shed tears for his father Imam al-Hussain (a) daily. Every time they brought him water and food, he would weep, saying, “My father was denied water and died while thirsty. He was also hungry when he was martyred.” Someone told the Imam why he is so restless when he is reminded of Imam al-Hussain. His eminence said, “Jacob wept for longing Joseph so much that he went blind even though Joseph was alive in this world. Imam al-Hussain was martyred right before our eyes in the most brutal way. Why should we not weep for him?”

Imam al-Sajjad was poisoned and martyred on Muharram 25, 95 AH in Medina at the hands of Walid ibn ‘Abd al-Malik. He was buried in Baqi Cemetery next to his uncle Imam al-Hassan (a). He was 57 years old when he was martyred. May Allah’s peace and blessings be upon him.