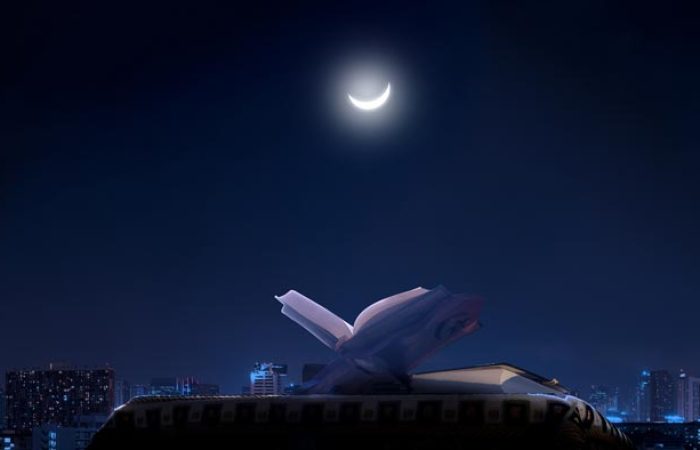 What Does the Quran Say About Reciting the Quran?

Therefore, recite the Qur’ān as much as possible.1

The Quran is Allah’s pact with people. Therefore, it is befitting that every Muslim carefully looks at his pact (i.e., the Quran) and reads fifty verses of it every day.

There are many reasons for this. When we read the Quran, we are constantly reminded of the realities of life in this world and the next. We learn of the consequences of sins and the rewards of good deeds. In short, reading and pondering on the Quran increases our piety.

What Makes the Month of Ramadan Special?

The month of Ramadan is unlike any other Islamic month. According to the Prophet (s), it is a month in which good deeds are multiplied, and evil things are effaced; it is a month of blessings, repentance, forgiveness, freedom from the Fire, and achieving paradise.

His holiness has advised us to refrain from committing any forbidden act in this month. He has also told us to recite the Quran very much, ask Allah to grant our wishes, and remember Him greatly. Further, the Prophet has told us not to consider this month like the other months because the month of Ramadan is superior to other months in Allah’s view.

How Much of the Quran Should We Recite in Ramadan?

Of course, this does not mean one has sinned if one does not recite part of or the entire Quran in Ramadan. Rather, they have missed a golden opportunity to receive countless rewards.

How Important Is Reciting the Quran Correctly?

Learning to recite the Quran correctly is what many Muslims hope to achieve. How important is learning to read the Quran correctly? If the Quran is misread, the words of Allah would not have been uttered the way they should. The Quran has said that it is a book revealed in Arabic. Therefore, we must learn to read it with an Arabic accent while following this language’s phonetic rules. Moreover, the Prophet recommended that we recite the Quran with an Arabic accent. His holiness has said:

Read the Quran with Arabic melodies and sounds (i.e., accent).

The science of reading the Quran correctly is known as Tajweed. Learning Tajweed, which means beautification, makes your recitation more beautiful and appealing to all those who listen to your recitation. Therefore, learning to read the Quran with good Tajweed also brings many rewards, especially in Ramadan, known as “the Spring of the Quran.”

You can learn the Tajweed of the Quran by enrolling in Islam4u’s Learn Tajweed Course. God willing, you will become a master of Tajweed by completing this comprehensive course.

Can Kids Also Learn the Quran in Ramadan?

One of the best times for teaching the Quran to kids is during Ramadan. You can familiarize your kids with the Quran and explain to them the importance of this holy book and how it was revealed to the Noble Prophet (s) this month. The best way of teaching kids the Quran is by helping them memorize short surahs of the Quran. They do not even need to know how to read the Quran. They will memorize them by simply reciting the surahs verse by verse and phrase by phrase, thanks to their God-given intelligence and talent.

One of the best online courses for teaching the Quran to kids during Ramadan is the Quran Kids course of Islam4u. Visit the website qurankids.co and enroll your kids in this wonderful course to help them learn the Quran and memorize short surahs of the Quran while learning the meaning and their stories.